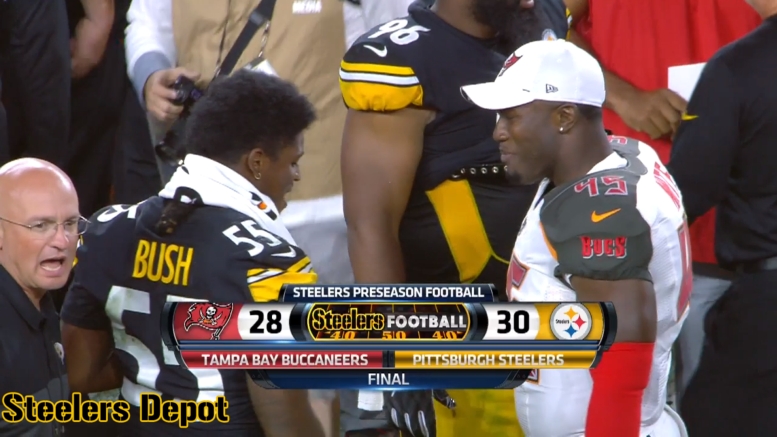 Did you even know, or remember, that the ‘other Devin’, Devin White, was on the Tampa Bay Buccaneers roster? Did you know that he was on the field for their defense? It would be hard to blame you, if that were the case, as the fifth-overall pick hardly had much of any impact in his team’s loss to Devin Bush and the Pittsburgh Steelers.

In fairness to White, however, he played just 11 snaps, the majority of that in coverage. Pro Football Focus credits him with two assisted tackles, though he officially had only one. I reviewed his snaps myself and he should have been credited with two assists. The site also credits him with giving up two receptions on two targets into his area of coverage for 27 yards. They gave him an overall grade of just 40, grading positively only for his tackling.

He blitzed on the play in which Joshua Dobbs was sacked, coming off the right edge of the offense. He got the corner on big Zach Banner, but the 350-pound right tackle got his hands on him enough to knock him off-balance, sending him to the ground. It may have at least influence Dobbs to step up into the pocket, however.

There was no such need to do so much searching to find highlights of Bush’s performance, however. Granted, much of that had to do with the simple fact the he played much more. Bush played the entirety of the first half, and the Buccaneers possessed the ball much more than the Steelers did. In fact, Bush logged more snaps on the opening drive than White did in the game.

Still, the future of these two players is going to be linked for some time, the Two Devins of the top 10 of the 2019 NFL Draft at the inside linebacker position. One begins his career in Tampa Bay, replacing Lavonte David. The other starts off in Pittsburgh, coming in to fill the shoes of Ryan Shazier after the Pro Bowler was injured in 2017.

We’ve already talked about Bush’s game multiple times and got a film room up. He recorded 10 tackles, including seven as the primary tackler. Among them was a stop on fourth and one that he split with Olasunkanmi Adeniyi. On the play prior to that, he held a reception to eight yards on third and nine. He had a pass deflection that could have been a pick six the next time he’s in that situation—at least were it not negated by penalty.

The Steelers find themselves very encouraged by his first snaps. And it’s worth remembering that Bush was their guy all along, or so the story goes. Had they had a shot at either Devin, their preference was for Bush.

This first preseason game isn’t going to mean anything in the long run in telling their stories, but it is just the first taste, and, really, all we have right now, their first time seeing each other. Having gotten to know each other during the pre-draft process, the two spent a good amount of time in conversation after the game as well.