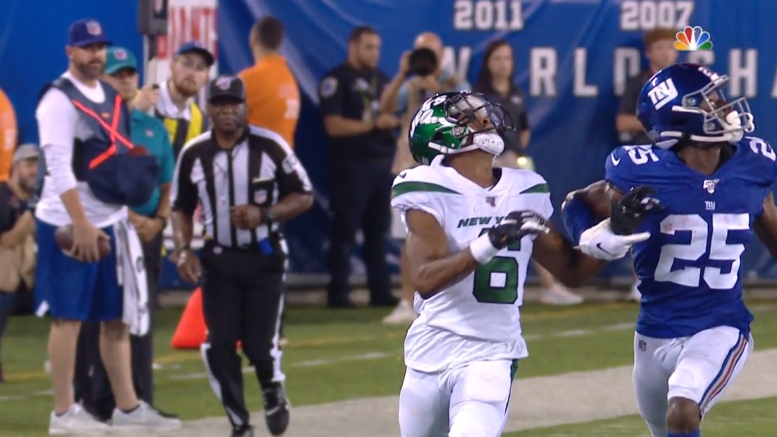 The NFL’s new pass interference review rule really had its baptism moment last night when for the first time in the league’s history, we saw an instance in which no foul was called on a play, only for one to be added upon review via a coach’s challenge for defensive pass interference.

The moment came in the game against the New York Giants and the New York Jets. While the Giants won the exhibition game, the Jets will go down in history as being the first team in NFL history to successfully win a replay challenge over a penalty.

In the middle of the third quarter, former Giants quarterback Davis Webb looked vertically down the field for Tim White. Defensive back Corey Ballantine was in coverage, and he was able to get a hand out in front of the ball to redirect it out of harm’s way. It was third and eight from the Jets’ 22-yard line, in a 17-15 game that they were losing.

But Jets head coach Adam Gase saw something on the replay monitor…or at least he was told something. Ballantine had had a grasp in White’s wrist as the two were running down the field together. In fact, he had a hold of the wrist for the whole stretch run of the play, even as he was breaking up the pass.

Immediately after the play, the color commentators were ruminating, upon seeing the replay, whether or not Gase would have thrown the flag in a regular season game in a meaningful spot. Only to see him actually throw the flag in the preseason game. The Jets were lined up to punt the ball away before the red laundry his the turf.

It was, frankly, clear pass interference, and it resulted in a 38-yard penalty and a new set of downs across midfield at the Giants’ 45-yard line, as opposed to punting from their own 22. Head of Officiating Al Riveron agreed, and overturned the non-call on the field. here’s how it reads in the play-by-play:

That’s a new one. As Riveron argues, “the defender significantly hinders the receiver’s opportunity to catch the ball. The ruling on the field is changed because there is clear and obvious visual evidence of defensive pass interference”.

“In #NYJvsNYG, the defender significantly hinders the receiver’s opportunity to catch the ball. The ruling on the field is changed because there is clear and obvious visual evidence of defensive pass interference.” – AL pic.twitter.com/DPiORSHdMd

This is going to draw some ire, but frankly, I’m satisfied with how this played out. A penalty that was not called on the field was later properly corrected and instated. I would similarly hope that errant calls will be removed based on a similar body of replay evidence.