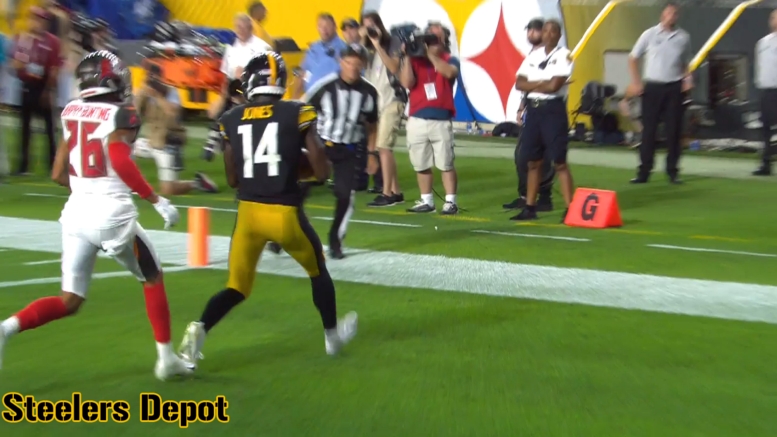 Granted, JuJu Smith-Schuster was not going to be exposed to the first preseason game. It’s a given that Donte Moncrief also did not contribute with an injured finger. Rookie Diontae Johnson was out while nursing a hip injury.

Be that as it may, first-year wide receiver Tevin Jones started Friday’s game against the Tampa Bay Buccaneers, and he came up with catches a number of times. Although he did have one drop late in the game in the third quarter, he performed above the line in extensive playing time, only checking out of the game ahead of the final two drives with 11 minutes to play.

Jones earned himself a spot on the practice squad last season with a strong showing in the final preseason game in 2018, a game in which he caught two touchdown passes. He started off the 2019 preseason schedule with another quality game that included a third touchdown reception as he made the biggest receiving impact this side of James Washington.

I don’t know how much closer that gets him to being in the discussion to compete for a spot on the 53-man roster, but I do know this: he can block in the run game, and he is versatile. He played extensively out of the slot on Friday in addition to playing on the outside.

On paper, he sounds like the ideal candidate at the position, a guy that you would want on your team, but it’s still a very crowded room,  even with him arguably raising his stock with his showing for the Steelers in the first preseason game.

I do think that he is in the mix for a sixth wide receiver spot behind the four players who are already locked in, all of whom were named above. I think the fifth position will go to either Eli Rogers or Ryan Switzer (Rogers also starts the game), but the loser will not be guaranteed a spot.

That’s where a guy likes Jones can wedge his way in with a strong preseason. He is off to a good start, picking up from where he left off a year ago. If he can keep it going, then he will have a fair chance, I think.