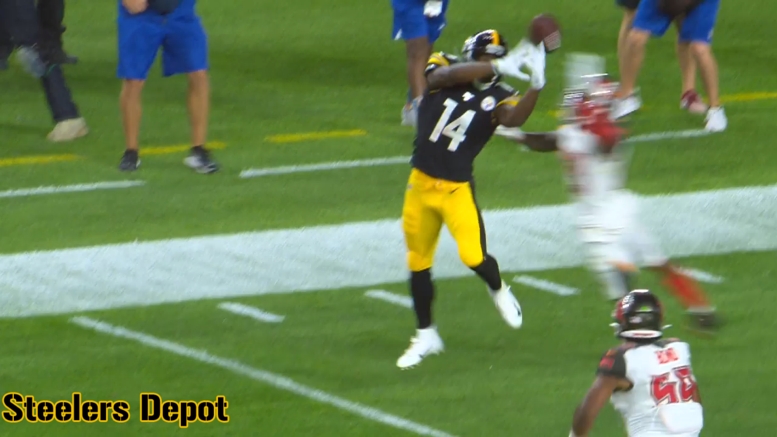 One of the features I introduced last season, since we try to chart them anyway, is a weekly drop report, the same way we handle missed tackles. The Pittsburgh Steelers are one of the most sure-handed group of skill position players in the league, fortunately, though Antonio Brown’s absence will probably increase their drop percentage this year.

When talking about the preseason, though, it’s a completely different ball game, since you’re dealing with players who are going to be deemed below NFL-caliber. I tracked at least five drops in Friday’s game against the Tampa Bay Buccaneers, which I’ll display below, and there are a couple of other plays I weighed for consideration as well.

The first pass we’ll look at was intended for Ryan Switzer, a short pass outside the numbers just a few yards beyond the line of scrimmage for Joshua Dobbs. It was a less than ideal angle, but the third-year receiver simply failed to corral this pass. The only ‘saving grace’ is that it wouldn’t have counted anyway due to an offensive holding penalty.

That was the only drop of the first half, but there were four in the second, including a big one from Diontae Spencer. I highlighted another candidate from Spencer in my film room session on him earlier this week, but this pass was a clear drop, so it gets the inclusion. The replay makes this crystal clear, so there’s not much need for analysis here.

While he had a good game overall, Tevin Jones did have one drop, yet even that comes with some qualification. This pass from Devlin Hodges was delivered too far to the inside of the field, making the receiver have to reach back to try to pluck it, but the ball went off his hands for an incompletion before he was hit by the defensive back. That may have broken up the pass anyway, but this ball was dropped before he arrived.

This is certainly the harshest pass I graded as a drop, from running back Trey Edmunds, but like the play above, I made the judgement based on the fact that the ball comes off his hands. It’s high and wide, perhaps a bit too much, so I expect there to be some disagreement on this one, but I didn’t think it would hurt to include it, all the same.

The final drop came from the new face in the room, Brandon Reilly, late in the game. Hodges put the ball in a good spot for him here, but again, the ball clangs off his hands and bounces out of bounds. It’s hard to make a good first impression when you put the ball on the ground.