One of the few things that really irritates me when it comes to quarterback play is when a player fails to throw for the chains on third downs and especially when 5 or more yards are needed for a new set of downs or a touchdown. With that irritation of mine noted, I thought it would be fun to look back at the 2018 NFL season to see which quarterbacks were aggressive on third and long plays and which ones had the most success when they did throw for the sticks when 5 to 10 yards were needed on that crucial down,.

Before we discuss my findings, I must point out that all of the stats compiled for this third down quarterback passing study came courtesy of Sports Info Solutions as they do a great job when it comes to charting every NFL play and especially when it comes to pass distances and if a throw was on target. Obviously, some of this data is subjective, but overall I have found it SIS to have very limited amounts of questionable stats.

As I mentioned at the beginning of this post, only passing attempts from quarterbacks on third downs with 5 to 10 yards to go were used in this starts study. asking a quarterback to throw more than 10 yards down the field on third downs is a tall task and that’s why I cut it off at that distance. Additionally, when less than 5 yards is needed on third downs it’s easy to forgive quarterbacks for throwing short of the chains.

In the table of stats below, you will see the total amount of pass attempts from 34 total quarterbacks on third downs with 5 to 10 yards to go. In the next column you will see the number of pass attempts that were charted as flying at least to the first down marker. The third column is the percent of total pass attempts that were thrown to the chains and beyond on third downs with 5 to 10 yards to go. The next column shows the completion percentage on throws to the chains. The on-target trow data is in the next two columns and those stats are then followed by regular passing stat numbers that should be self explanatory.

While Brees wasn’t very aggressive last season on these third and long pass attempts, when he did decide to throw for the chains he had some good success. Not only did Brees complete 60% of his 25 third and long throws that went at the chains or beyond, 80% of them were on target. Those 15 completed passes resulted in 249 passing yards and 3 touchdowns. Additionally, none of his 25 chain attempts were intercepted. His passer rating on those 25 total chain attempts was a very robust 133.6 and only Russell Wilson of the Seattle Seahawks and Eli Manning of the New York Giants posted better passer ratings than he did.

While Roethlisberger’s 45.5% completion rate on third and long chain throws last season wasn’t overly great, his 20 completed passes resulted in 368 yards and 5 touchdowns. Curiously enough, 3 of those 5 touchdown passes went to tight end Vance McDonald and 4 of the 5 came within the red zone. The one outside the red zone was the long touchdown by McDonald against the Buccaneers. That was a third and 10 play and the pass from Roethlisberger to McDonald traveled 11 yards in the air past the original line of scrimmage.

One last thing that really sticks out in this 2018 third down quarterback aggressiveness study is how different the two hugest drafted rookie quarterbacks, Baker Mayfield and Sam Darnold, performed. While Mayfield was 4 percent more aggressive than Darnold was last season when it came to throwing at the chains on third downs with 5 to 10 yards needed, the Cleveland Browns quarterback had a passer rating on those 37 total attempts of 39.0. Darnold, on the other hand, attempted just one less such pass than Mayfield did in 2018 and registered a passer rating of 114.9.

Obviously, the passer ratings are benefited by touchdowns, so that needs to be taken into account. In short, passer rating isn’t an overly great way to rank these quarterbacks, but worth looking at just the same. The average aggressiveness last season of the 34 quarterbacks used in this study was 58.4% and the completion percentage average on such throws was 49%.

While these aggressiveness stats are nice to have, the more important stats are related to a quarterback’s ability to convert any third down distance via a pass and regardless of the distance the pass is thrown. Last season, Roethlisberger completed 56% of all third down pass attempts when needing 5 to 10 yards and of those 75 total attempts, only 30 plays were deemed successful ones for a 40% rate. Of the 34 quarterbacks used in the aggressiveness stats study above, Roethlisberger ranked 22nd overall in conversion rates based on that criteria. That noted, New England Patriots quarterback Tom Brady had an overall conversion rate on third downs with 5 to 10 yards to go of just 37.7%. 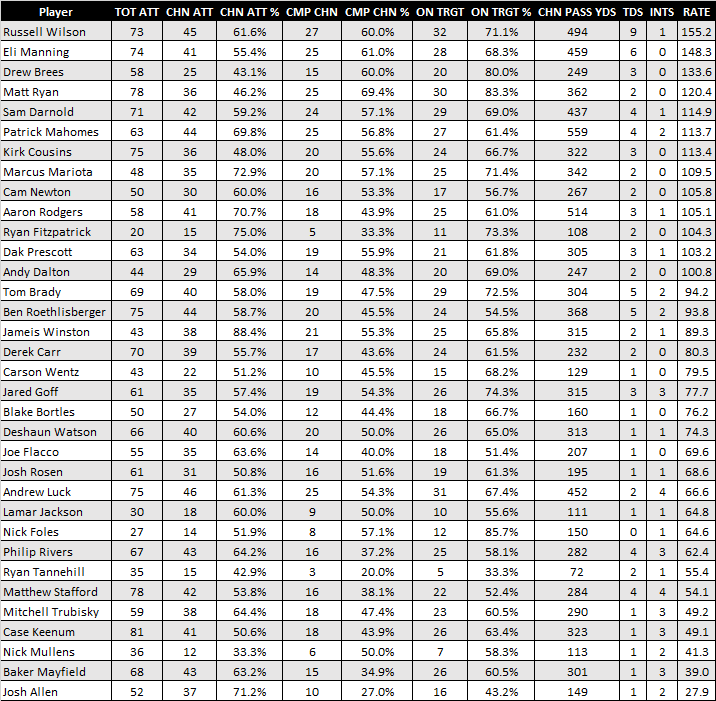