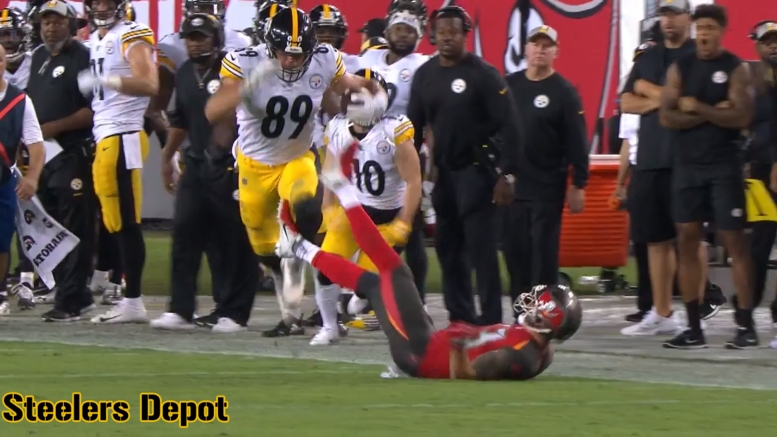 Due to the loss this offseason of tight end Jesse James via free agency, the Pittsburgh Steelers addressed that position in this year’s draft by selecting Zach Gentry out of Michigan in the fifth-round. Even so, both Gentry and fellow Steelers tight end Xavier Grimble will both play behind starter Vance McDonald in 2019 and he’s coming off a career season that included him catching 50 passes for 610 yards and 4 touchdowns in the 15 games that he played in. Over half of those receiving yards that McDonald registered last season came after the catch and only fellow NFL tight ends George Kittle and Travis Kelce registered more yards after the catch than he did in 2018.

Fantasy breakout coming with Jesse James out of the way? https://t.co/dyK3WNeUh5 pic.twitter.com/lFaqPtYTM8

According to Pro Football Focus, McDonald registered 392 receiving yards after the catch in 2018,. His average of 7.8 yards after the catch is obviously a very healthy number and even 2.2 yards better than Kelce’s 2018 stat. That noted, it’s important to remember that one of McDonalds touchdown receptions last season, the 75-yarder for a touchdown against the Tampa Bay Buccaneers in Week 3, included 64 yards gained after the catch.

That long catch and run against the Buccaneers last season aside, however, McDonald also had 12 other catches besides that one in which he gained 10 yards after making the reception. Several of those 13 total plays are listed below for you in gif form to remember and in the exact order in which they happened.

As you’ll see in these clips below, McDonald earned quite a few of those yards after the catch last season and a large amount of them came even after having been contacted by two different defensive players.

40 of the 50 receptions that McDonald had in 2018 resulted in successful plays. Additionally 35 of his 50 receptions came when the Steele offense had their 11 personnel grouping on the field.

If McDonald is once again able to stay healthy for at least 15 games in 2019, he should be able to exceed the stat line he posted in 2018. Additionally expect around half of his receiving yards in 2019 to come after the catch and that number could be over 500.