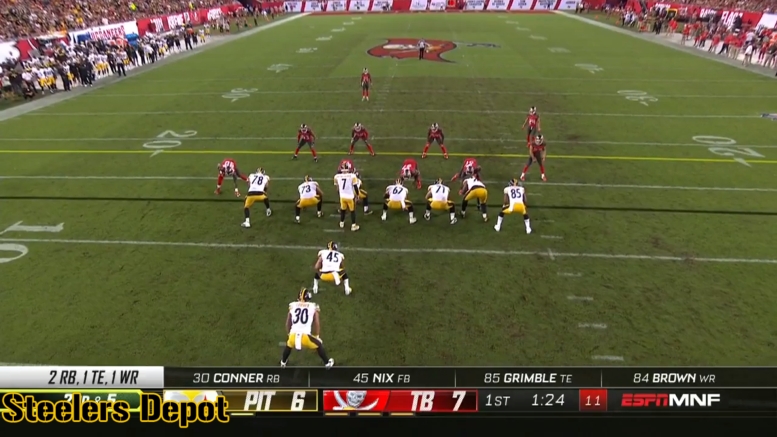 While the Pittsburgh Steelers did address the tight end position during this year’s draft, the player they selected in the fifth-round, Michigan product Zach Gentry, likely has quite a bit of developing to do before he starts seeing any considerable playing time on offense. Assuming that’s true, tight end Xavier Grimble will likely open the 2019 regular season as the No. 2 behind starter Vance McDonald. While Grimble was technically the Steelers No. 3 tight end last season, he certainly logged quite a bit of snaps as if he were the team’s No. 2.

In total, Grimble played 162 total offensive snaps last season that didn’t include kneel-downs or plays negated by penalties, according to our own charting done by Matthew Marczi. Not only that, 129 of those snaps included him being on the field in personnel groupings that utilized two or more tight ends. So, how did the offense perform last season when Grimble was on the field with at least one other tight end? Below is a breakdown of each position group he was part of and the table of data includes yard per play stats and successful play rates.

The Steelers offensive stats below are grouped by not only personnel groupings, but key players in those groupings. For example, the first personnel grouping listed, 22, included Grimble being on the field along with fellow tight end Jesse James and fullback Roosevelt Nix. On those 33 total plays run out of that grouping and with those players on the field only 16 were successful with 8 being passes and 8 others being runs.

The other 22 personnel grouping that Grimble was as part of last season included tackle Chukwuma Okorafor serving as the other tight end on the field. Of those 40 plays, 38 were runs and only 16 (42.1%) of those were successful.

In total, the Steelers offense ran 73 plays out of 22 personnel last season that included Grimble and Nix both being on the field. The offense only had a 45.2% success rate on those 73 plays. The Steelers offense also ran 76 total plays that included both Grimble and Okorafor on the field at the same time and the success rate on those plays was a sad and lowly 39.5%.

In total, the Steelers offense ran 87 running plays last season when Grimble was on the field and when two or more tight ends were used. Those 87 running plays produced just 336 yards and 2 touchdowns and the success rate was a lowly 36.8%.

While the Steelers passing game last season with Grimble on the field with at least one other tight end produced a successful play rate of 57.1%, there was one more play that should have been hugely successful that wasn’t because of a fumble. That one play was the long catch and run by Grimble against the Denver Broncos that culminated with the tight end fumbling at the 1-yard-line and the football going through the end zone for a touchback.

With James leaving this past offseason during free agency  for greener pastures, the Steelers will be almost forced to play Grimble in a lot of their personnel groupings in 2019 that require two or more tight ends. Additionally, Grimble is likely to log a lot more 12 personnel grouping snaps in 2019 than he did in 2018 with James now being gone. That total was just 20 last season.

On top of everything else, McDonald, the team’s No. 1 on the depth chart, is likely going to need to play a lot more snaps in 22 and 23 personnel groupings in 2019. Last season, McDonald played just 17 such snaps and the Steelers offense scored 6 touchdowns on those plays. Grimble was only on the field with McDonald for 2 of those 17 plays and both came against the New Orleans Saints late in the season and also with Okorafor serving as a third tight end.

As NFL analyst Matt Bowen of ESPN pointed out last week, the Steelers heavily used 22 personnel last season. If they use it heavily again in 2019, Grimble will more than likely be included in it once again. Will the Steelers 2019 22 personnel grouping improve in the successful play rate stat? They need to because a trepeat  of last year’s 45.2% rate isn’t going to cut it.