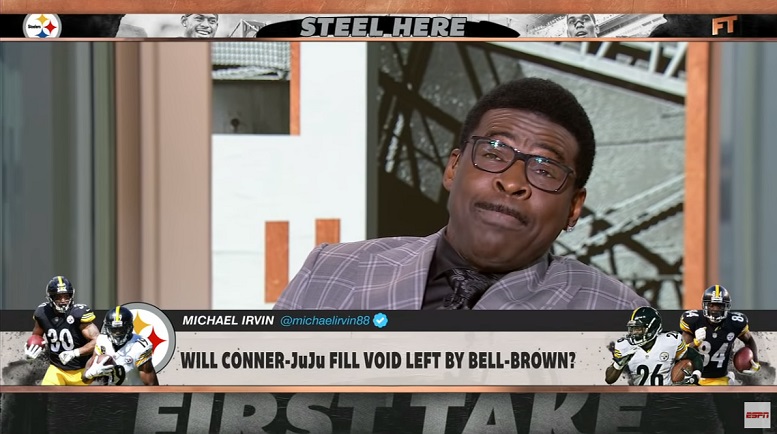 The argument related to whether or not Pittsburgh Steelers wide receiver JuJu Smith-Schuster can continue to produce without wide receiver Antonio Brown playing across from him in the offense moving forward is one that will continue on well into the start of the 2019 regular season. Even so, former NFL wide receiver and current NFL Network analyst Michael Irvin weighed in some on the argument this week while covering the topic with ESPN’s Stephen A. Smith on ‘First Take’ and he made it clear that he fully expects Smith-Schuster to continue putting up great stats in the Steelers offense even with Brown no longer being in Pittsburgh. Not only that, Irvin revealed during that segment that in 2017 he strongly urged Dallas Cowboys owner Jerry Jones to draft Smith-Schuster.

“I told Jerry Jones, that’s the only dude, the one. This is the dude I went to Jerry Jones and almost got down on my knees and begged to draft with JuJu Smith-Schuster,” Irvin told Smith. “Because, again, I worked out with him. I saw. This kid, I said he’ll be the perfect guy to come in as a number two and take over as a number one. And that’s exactly what he’ll have the ability to do.”

Obviously, Jones didn’t take Irvin’s advice during the 2017 NFL Draft. In case you’ve already forgotten, the Cowboys drafted cornerback Chidobe Awuzie in the second-round that year and two spots ahead of the Steelers selecting Smith-Schuster. Since then, Smith-Schuster has gone on to become the best wide receiver in the 2017 draft class as evidenced by him catching 169 total passes for 2,343 yards and 14 touchdowns.

Not only did Irvin say recently that he believes Smith-Schuster and the rest of the Steelers offense will be fine moving forward without the likes of Brown and running Le’Veon Bell, he likes the team’s chances this year of returning to the playoffs and potentially making a run at a seventh Lombardi Trophy.

“The only thing that we have an ability to question is can they produce in the playoffs,” Irvin told Smith in regard to the 2019 Steelers. “Now, Le’Veon Bell and Antonio Brown never produced in the playoffs to the tune of a Super Bowl. So, it’s not like to surpass them they’ve got to go win a Super Bowl. They just got to get into the playoffs and make plays. I believe the Steelers are in good position with the young talent they have.”

Irvin also made it clear to Smith during their argument that he buys into the notion that the Steelers went through an addition by subtraction when it comes them trading away Brown during the offseason as he believes that move, combined with the team still having a lot of other talented team-orientated players, will ultimately have a big impact when it comes to them being able to overcome the adversities in involved with a typical NFL season.

“I always say this and this is why I’m okay with what happened in Pittsburgh; it’s not the way I would want it to happen, but it happened. I always say this, this game, in this league of football, it’s too hard to win Super Bowls,” Irvin stated to Smith. “You can’t do it being a football team. You can’t do it even being a football organization. This only happens when you become a football family because the road to achieve championship is paved with peaks and valleys. You can handle the peaks, everybody’s happy. But the valleys tear teams apart. And if you’re not a family to come to together in those valleys, you have problems. Now, without Antonio Brown, without Le’Veon Bell, they’ll have a chance now, again, to become that family.”

If you dare, you can watch the full discussion between Smith and Irvin below. However, Smith-side of the arguemet was very basic and the same bland narrayive we’ve heard from most of the national sports media ever since the Steelers traded Brown to the Oakland Raiders back in March.

“As much as I love JuJu Smith-Schuster, 111 receptors, 1,426 yards, averaging more than 12 yards a catch, it’s easier to do with Antonio Brown on the opposite side of the field as the number one option,” Smith argued. “Now you’re going to acquire that level of attention that was aimed in Antonio Brown’s direction. I think it’s going to be considerably harder.”