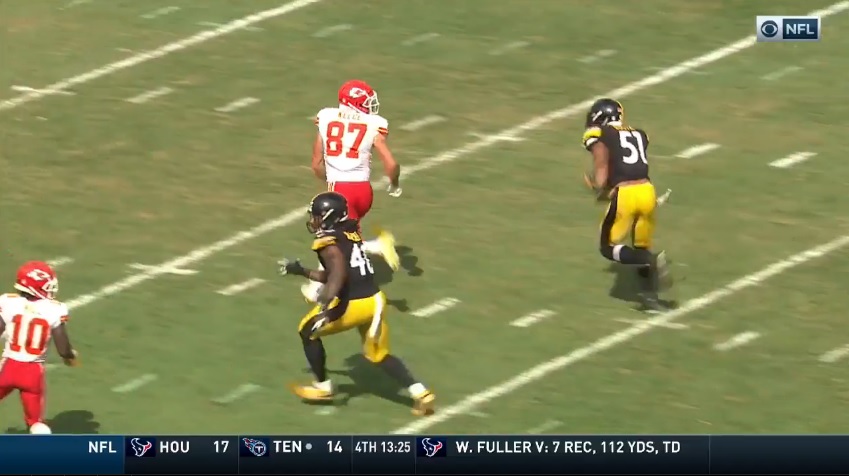 Whether they are rational or not, most people grow up with fears. Fears of monsters eventually transition into fears of illness, bankruptcy or growing old but very rarely do fears stay consistent throughout one’s life. Though there is one fear that has remained consistent in my life for as long as I can remember. It is not monsters, or ghosts. No, it is much worse, as the sights of an opposing tight end running up the seam against the Pittsburgh Steelers defense is a sight that has seemingly haunted myself and the team for years.

The origin of this fear started almost a decade ago, when a young tight end named Rob Gronkowski torched the Steelers for three touchdowns in his rookie season. Since then, the fear has only worsened as Gronkowski has not just rented space in the mind of the Steelers, he practically moved in. Making matters worse, Gronkowski also invited friends over to visit from time to time, inviting the likes of Travis Kelce and Jared Cook last season. 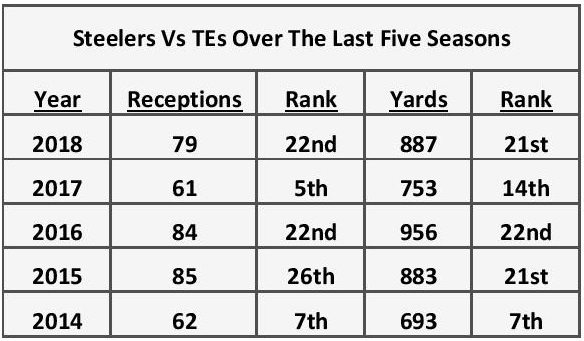 The Steelers have generally done a poor job at defending tight ends with 2014 and 2017 being the only real exceptions. The team has placed in the bottom half of the league in receptions and receiving yards allowed to tight ends in three of the last five seasons. Even with Gronkowski’s monster performance against the Steelers in 2017, the defense performed fairly well against tight ends before regressing last season. 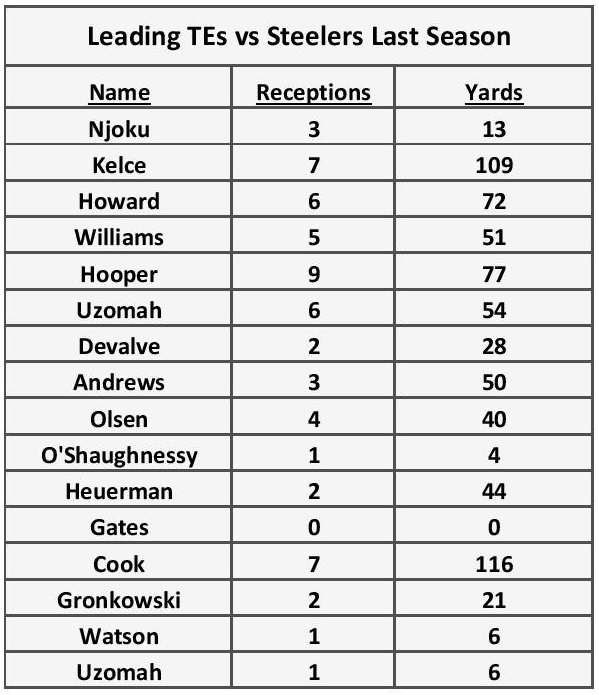 The Steelers struggled to contain tight ends right out of the gate, allowing an opposing tight end to record at least 50 receiving yards in five of their first six matchups. Heading into the bye week, the team had a major problem on their hands but it seemed that the team had found a way to relieve their issues down the stretch.

Over the last seven games of the season, the defense left little breathing room for opposing tight ends. The Steelers even managed to limit the nightmare inducing Gronkowski to just two receptions for 21 receptions, leaving many to wonder if they were in fact dreaming.

Only one tight end managed to record more than two receptions against the Steelers’ defense during this stretch. Unfortunately, that tight end ending up being Jared Cook who played a big part in the Oakland Raiders’ victory over the Steelers.

While the team was able to contain an ailing Gronkowski, the Patriots’ tight end is a nightmare of the past rather than the future. Other top tight ends such as Cook and Kelce still had their way with Keith Butler’s defense, combining for 225 receiving yards or 25-percent of the total yards allowed to tight ends last season.

The tight end nightmare has haunted the Steelers for much of the last decade and the team has struggled to provide solutions. Sean Davis was supposed to help but a chilling image of Gronkowski pointing and laughing at the Steelers’ safety is all anyone remembers from that experiment. Morgan Burnett was brought in but his help was no more than a one-year trial run that did not go as planned. Jon Bostic was forced into coverage on more than a few occasions last season and that went just as well as you would expect.

It would seem naïve to suggest that 2019 could be the year the Steelers conquer their scariest nightmare but there is legitimate optimism in finding a solution this season. Devin Bush is an immediate upgrade in coverage over Bostic and the team will also have options such as free agent acquisition Mark Barron along with homegrown talent such as Terrell Edmunds and perhaps even Marcus Allen.

How the Steelers defend opposing tight ends will be a key storyline to watch this season. Now that Gronkowski has moved out of the Steelers’ headspace, it is up to the team to ensure that no one else decides to move in.