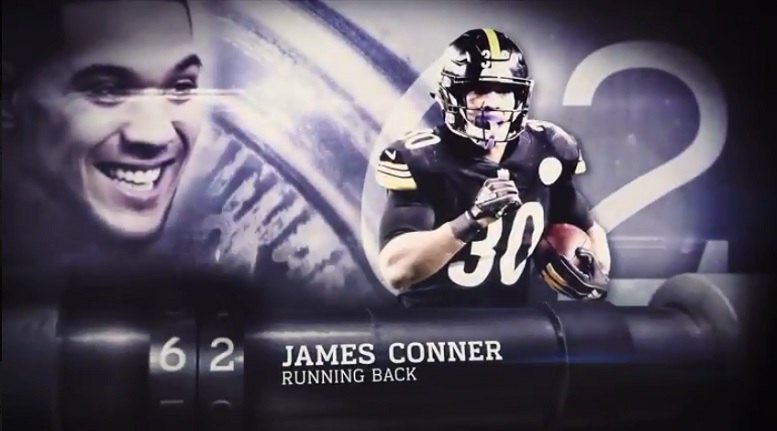 Pittsburgh Steelers running back James Conner proved himself to be an NFL commodity during the 2018 season as the University of Pittsburgh product registered nearly 1,500 total yards from scrimmage and 13 total touchdowns as the team’s starter last season. Conner’s great sophomore season was punctuated with him being voted to his first Pro Bowl. With the 2019 regular season quickly approaching, it was revealed Thursday night that Conner is rankled 62nd overall on the annual NFL Network Top 100 list.

Conner’s great second season in the NFL came courtesy of running back Le’Veon Bell deciding to sit out the entire 2018 season instead of playing under the franchise tag he received from the Steelers. Five times last season Conner rushed for more than 100 yards in a game and he also scored two touchdowns in five different games last season.

“That’s a man’s back right there,” Cleveland Browns defensive end Myles Garrett said of Conner. “He runs it like kind of old school. He doesn’t try to make you miss, he just tries to run through you. He’ll try to stiff-arm you, get around you, but you know, the best way is to go straight through someone and that’s his kind of mentality.”

Conner was originally selected by the Steelers in the third-round of the 20167 NFL Draft. After a very insignificant rookie season that unfortunately ended early due to a knee injury, Conner proved in 2018 that he can be a number-one running back in the NFL and his teammates definitely took notice of that.

“You know, it’s unbelievable to see how far he has come,” Steelers wide receiver JuJu Smith-Schuster said of Conner. “Coming in together, being able to play as a slot guy, behind in the backfield with Ben, you know making those catches and those runs helped out our team a lot.”

Conner is now the third Steelers player to be included in this year’s NFL Network Top 100 list as defensive lineman Cameron Heyward and outside linebacker T.J. Watt both were ranked earlier in the countdown at 88th and 93rd overall, respectively.