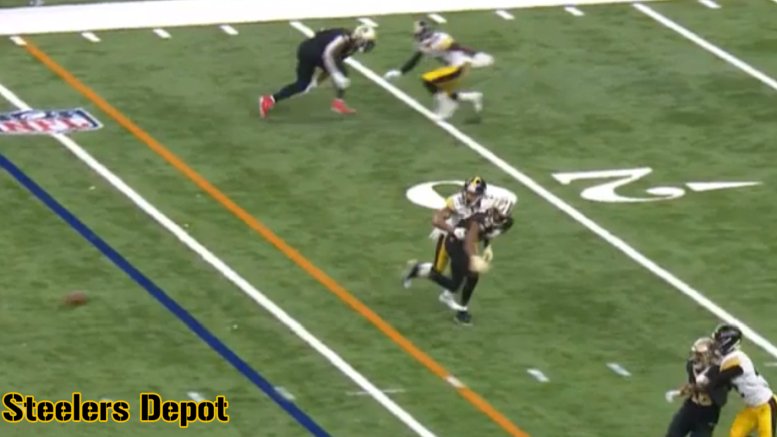 NFL games can often be decided by just one play late in contests. Last season, the Pittsburgh Steelers ended with a 9-6-1 and had they made at least one more play in one of their three losses and lone tie, they would have likely won the AFC North and thus made it to the playoffs. With the Steelers 2019 training camp set to get underway, below is one quick look back at four key plays the team failed to make late in games last season that prevented them from playing in the postseason tournament.

As bad as the Steelers played in their 2018 regular season opener against the Cleveland Browns, they still had a very good chance to win the road contest in overtime. After driving to the Browns 24-yard-line in their second offensive possession in overtime, the Steelers sent out kicker Chris Boswell in the drizzling rain to attempt a 42-yard field goal to win the game. However, following a high snap from long snapper Kameron Canaday that punter Jordan Berry was able to handle and get placed down, Boswell pushed his kick attempt wide to the left for the miss. The game ultimately ended in a tie after both teams failed to do anything with the football in their final two possessions of it in overtime. Little did we know at the time that Boswell’s field goal miss in that opener against the Browns would be the first of seven misses for the season.

Entering the Steelers Week 12 road game against the Denver Broncos the Steelers had a record of 7-2-1. They were favored to beat the Broncos on the road but found themselves training by 7-points late in the contest with one last shot to at least tie it. After taking possession of the football with 4:26 left in the fourth quarter, the Steelers effectively drove all the way down to the Broncos 2-yard-line. With 1:07 left in regulation, the Steelers offense faced and 3rd down goal and quarterback Ben Roethlisberger threw an ill-advised short pass to wide receiver Antonio Brown in the middle of the field that was intercepted by Broncos defensive tackle Shelby Harris for a game-ending touchback. Had the Steelers offense scored on that play or the next, head coach Mike Tomlin would have needed to decide to attempt to kick the extra-point to tie, or go for two and the win.

The Steelers laid another egg in their Week 14 road game against the Oakland Raiders, yet another contest they were favored to win. Bad overall showing in that game and all, the Steelers still had an opportunity to make one play very late in that contest to escape Oakland with a win and they failed to do so. With :25 left in regulation, the Raiders offense faced a 4th and goal from the Steelers 6-yard-line. Had they failed to score on that play the Steelers would have won 21-17. The Raiders scored a touchdown, however, as Oakland quarterback Derek Carr connected with tight end Derek Carrier just short of the goal-line and he easily went into the end zone. On that play, Carrier beat Steelers cornerback Mike Hilton back to the inside on pivot route. Hilton admitted later that he overplayed Carrier to the outside after believing that is what the tight end was going to do following pre-game tape study he had done. While Boswell would go on to slip and miss a 40-yard field goal attempt just a few plays later that would have tied the game and sent it into overtime, the Steelers defense being unable to stop the Raiders offense on fourth down is what essentially lost the team the game. Just in case you prefer blaming that loss on Boswell, however, the video of the missed kick by Boswell is also below. Take your pick.

In the Steelers thrilling Week 16 road game against the New Orleans Saints the team’s defense had a golden opportunity to potentially win the game had they been able to stop a 4th and 2 play with 2:00 left in regulation time. However, on the play in question, an incompleted quick slant pass from Saints quarterback Drew Brees to wide receiver Michael Thomas, Steelers cornerback Joe Haden was flagged for pass interference and New Orleans was subsequently given a new set of downs. It was a seemingly questionable penalty on Haden and the second one on him in the game. To make matters worse, Steelers defensive end Stephon Tuitt contended that he had slightly tipped Brees’ pass at the line of scrimmage before it even made it to Thomas and had that been ruled by the officials on the field, the pass interference penalty couldn’t have been called. Like it or not, it was a failed play by Haden and the Steelers defense and the Saints offense would ultimately go on to finish that offensive possession with a touchdown. Had the Steelers defense stopped that fourth down play, odds were good that the team would have survived the final two minutes and thus escaped New Orleans with a big win.

Summary: Obviously, one can’t entirely blame the Steelers 2018 9-6-1 record and the team’s failure to make the playoffs on just one or more of these four plays listed above. However, with all of them occurring very, very late in contests and with the potential balance of the games at stake, it’s hard for one not to be a little results biased with a touch of historical revisionism. Personally, I will forever remember these four players listed above as huge asterisks related to the Steelers failing to make the playoffs last season. If only they had managed to make just one of these plays…