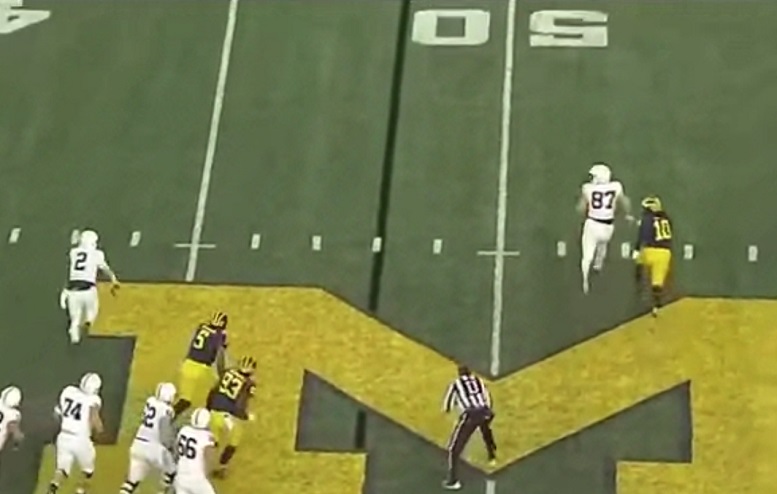 We have provided a ton of coverage here about Pittsburgh Steelers first round draft pick, linebacker Devin Bush, so why not a little more.  And this coverage is about coverage.

Alex gave several good examples in an earlier film room article so I’ll try to expand upon that to show you some more examples of specific routes and his ability to defend them.

Bush brings much needed speed to the position and show very good mental processing to be able to diagnose plays. He was used in various ways on passing plays at Michigan.  They used him as a pass rusher from inside and on the edge. When playing more mobile quarterbacks he was used as a spy to limit their ability to scramble and run.  They used him in Zone coverage and looked comfortable getting depth, showed good route awareness and ability to read the quarterbacks eyes.

I am going to focus a little more on the Man coverage abilities. Take a look at a few different routes and see how he handles them.

RB to the Flat

Lined up on the far hash he’s got the RB coming to the flat on the nearside. He works his way over the top of two blocks and uses his speed to get outside and combine with a teammate for the tackle.

Same play, later in the game and it looks like he recognizes it as he’s already moving to the outside pre snap. This time he chooses to go under the block and it proves to be poor choice.

He picks up the TE coming from the right slot on a shallow cross. He takes away that option falling in behind the route looking like he’s trying to bait the QB to throw it there

Ohio State runs a slant with Terry McLaurin (#83) near side to try and disrupt Bush’s path but he’s slides underneath it and gets in good position on the inside hip, running stride for stride to force a small window

Later in the game, Ohio State makes an adjustment. They motion the TE to the right side and run double slant with the TE and McLaurin again. This time McLaurin makes his route more shallow making it more difficult to get around him. Bush is force to play chase behind the open RB

RB is split wide to the top of the screen and Bush is playing inside of him.  Indiana runs a rub route in front of him but Bush side steps it laterally. He shows good acceleration to close on the inside route and breaks up the pass leading to an interception

Man coverage is tough for any defender because the offense has the advantage of knowing where they are trying to go.  Defenders need to study trends, use proper technique and anything else they can to influence the route runner.

For instance, when the RB runs a check release through the line of scrimmage it commonly becomes a two way go. The route will go opposite of where the defender is leaning. I noticed that Bush likes to favor the inside on these plays, seemingly to induce the RB to go outside. That gives him a better chance only having to defend to the outside. This could work for a while but coordinators and RB’s will pick up on that and make adjustments to make him play both sides.

He has the speed and instincts to play in Man but the key negative is length. He has 32 inch arms which put him in the middle of the pack of the linebackers at the Combine. The average NFL TE is going to be 4-6 inches on average taller than him.  The Steeler TE’s range from 6’4” to 6’9” so that will be a good test to see how he handles that size in coverage.

He’s a versatile, athletic player who will be used in many ways on this defense.  How much Man coverage he will have to play will become more evident in time. He has the traits to build on what he already can do and should be able to handle what he is asked to do.