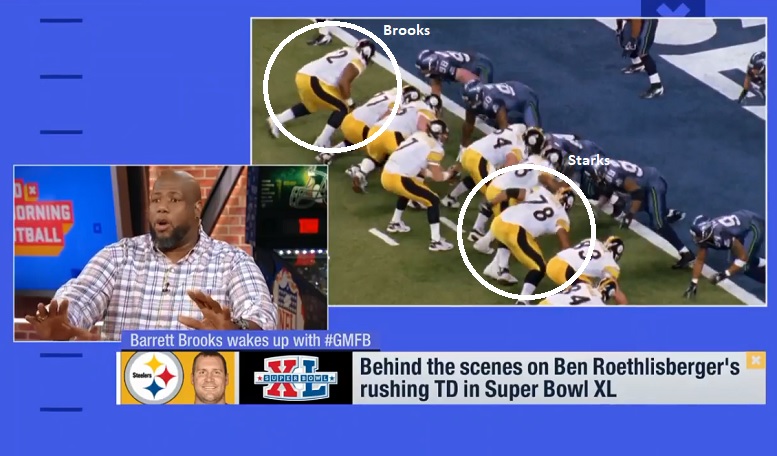 During the Tuesday morning edition of ‘Good Morning Football’ on the NFL Network, former Pittsburgh Steelers offensive lineman Barrett Brooks was a guest and late in the show he was asked to tell an interesting story of he had related to how he got himself on the field in Super Bowl XL late in the second quarter for the drive that culminated in the 1-yard touchdown plunge by quarterback Ben Roethlisberger.

“At that time, remember back in the day you used to get like 500 bucks a play every time you played,” Brooks said. “Well, I was long in the tooth, I was an old guy, so Max Starks was looking for his helmet and he said, ‘Where’s my helmet at?’ It was right beside me so I kicked it and it went under the bench. He [Starks] said, ‘Well, give me your helmet B. Brook.’ And I said, ‘No, no I got you.’ And I ran on the field and lo and behold we scored a touchdown.”

Brooks tried to justify his actions for him supposedly kicking Starks’ helmet underneath the bench so he could get on the field in his place.

Brooks went a step further in justifying his supposed actions of kicking Starks’ helmet under the bench.

While Brooks’ Tuesday story was indeed entertaining, I think he might have that play and game confused with a different one. You see, Max Starks, who was in his second season that year, was the starting right tackle in Super Bowl XL against the Seattle Seahawks and as you can see in the clip of the Roethlisberger touchdown below, he was the right tackle on the play, on the opposite end of the line than Brooks. In fact, Brooks reported into the game as an extra offensive lineman two plays earlier on the 1st and goal play and he stayed in the next two plays as well. Starks also played all three plays.

To the best of knowledge, those were the only three offensive plays that Brooks played in Super Bowl XL and my charting from that game also shows that Starks didn’t miss any offensive snaps.

Brooks, who was with the Steelers from 2003-2006, is now an analysts for NBC Sports Philadelphia.