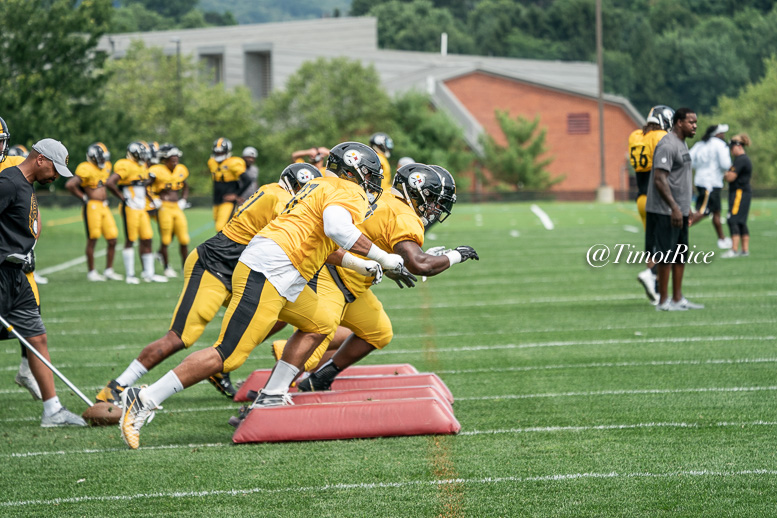 Flipping over to the defense with an overview of the defensive line.

Cam Heyward: Not a lot to note here. Cam is Cam which is to say, really good. All about staying healthy. As he turns 30, with the recent wear and tear he’s gone through, it’ll be smart to micromanage his reps. More days off, less work in practice, and I’m pretty much cool with playing him only a bit in the third preseason game. He’s not a guy you want to lose and I want him as fresh as can be for the end of the year for a competitive AFC North race.

Stephon Tuitt: This regular season is big for him, hoping to see him put it together and get over that 5-6 sack hump. But you’re not going to gain much insight from the preseason so there’s not a whole lot happening here either. He and David DeCastro always have fun battles one-on-one in OL/DL sessions. He and Heyward can show young guys like Isaiah Buggs the way and how to run after the ball.

Javon Hargrave: The biggest key with him is whether or not he’ll receive a contract extension. He absolutely deserves it but the money is going to be tough given his capped snapped count. Hargrave put it together last season and had his best year in both tape and the box score. This camp will hopefully be smoother than last year where Hargrave weirdly saw second-team work behind Daniel McCullers. I’m fine with just giving him off days, letting other players take those snaps, but hey, maybe that lit a fire under him to have that amazing year.

Tyson Alualu: Quiet, strong depth. That’s Alualu. He’ll rotate in wherever he’s needed and provide solid run defense and a tiny bit of pass rushing ability (though that declined last season). Another guy who is about maxed out and there isn’t a whole lot left we need to explore.

Daniel McCullers: McCullers, to his credit, had his best camp and season in 2018. It still wasn’t great but it was a start and enough for the Steelers to bring him back for another one-year deal. He showed up with more fire in his belly last year, even getting into a fight during camp. That generally isn’t good but for a teddy bear like him, it was kinda nice.

I think we’ve seen about the best out of him though. His biggest issues remain with his limited athleticism. Not something that’s going to change at this point. The Steelers simply can’t run the stunts and scrapes with him in the lineup they can with Hargrave. He is, however, good for walking back one of the poor, undersized centers in one-on-ones.

Isaiah Buggs: Despite being a 6th round pick, his odds of making the roster are good. The team always keeps six defensive linemen on the roster and Buggs makes as much sense as anyone to be that 6th. It’ll be interesting to see where he lines up. I think he’ll be up and down the line even if he doesn’t have great length for a 5 tech/4i and size/anchor for a one-tech. His hand use is advanced but he tested poorly and might be a bit of a tweener. Finding a role for him is going to be key out of the gate. He’ll have to learn to play with a more consistent motor and run to the ball snap-to-snap.

Lavon Hooks: Welcome back, Hooks. He’s been a practice squad lifer but unable to latch onto the 53 man roster. I thought he had a chance a few years ago, elevated to 2nd team work in the third preseason game but he’s never been able to get over the mountain. This year looks tough too, though the 6th spot is open, and an injury could be a game changer. I’m just not sure what Hooks does well. He’s versatile, able to play over center and tackle, but aside from some anchor in the run game, there’s not much standing out.

Casey Sayles: Sayles is back for his 2nd Steelers’ camp after spending time in the AAF a year ago. Here’s how I recapped his last stint with the team.

“Of the “other” defensive linemen, Sayles was one name who seemed to catch my eye the most, though that doesn’t always perfectly correlate with excellent play. A high motor player whose tough against the run and shows the ability to disengage from blocks. But you’re looking at a limited upside player who doesn’t offer much, or really anything, as a pass rusher. He did run third team LDE in camp, soaking up many more reps than the several of the other “unknowns” at the bottom of the depth chart.”

The run defense and strength are nice but not as valuable now as opposed to ten years ago. At least, not unless there’s a pass rush element to your game. A bit like Lavon Hooks, maybe even a little better, but he may be stuck in a similar situation.

Greg Gilmore: Rowing a similar boat as Sayles. Training camp attendee last year, cut outright, worked in the AAF. Little different path back with the team though. Invited to rookie minicamp on a tryout and rejoined the roster after that three day weekend. My report on him was less glowing than Sayles last year.

“Ugh. One guy I touted as a sleeper to make the 53, I couldn’t have been more off base. Gilmore has the look and size and…that’s about it. Fourth team nose tackle, as useless a title as “Assistant to the Regional Manager.” Barely enough reps to even offer a worthwhile evaluation. Likely he is cut outright.

Making the team after trying out would imply they saw something in him to bring him around the track again but the worry is playing time could be tough. He’ll have to hope for more days off from Hargrave to let him soak up a few extra reps. He’s gotta show something, anything, to get himself noticed.

Winston Craig: Newcomer but also spent time in the AAF. Former Richmond Spider who has spent time in an NFL camp last year. Probably more of an interior guy but we’ll see how much up and down he can play. Again, snaps are difficult to come by, unfortunately. Some pass rushing chops, little bit of that on his college resume, would serve him well to turn a few heads.

Conor Sheehy: Easy connection to make, I know, but an Ethan Hemer feel, if you can pull that name from the archives. Wisconsin product. Not terribly much to note though I hope someone steps up. I don’t want Buggs to feel that spot is going to be given.

Henry Mondeaux: Sorta feel like he could turn into a sleeper. Some production at Oregon and spent time in Saints’ camp. Good size and some athleticism. Maybe he’ll be the one to nudge Buggs but that’s a shot in the dark. We’ll see what happens but keep an ear out for him in our notes.