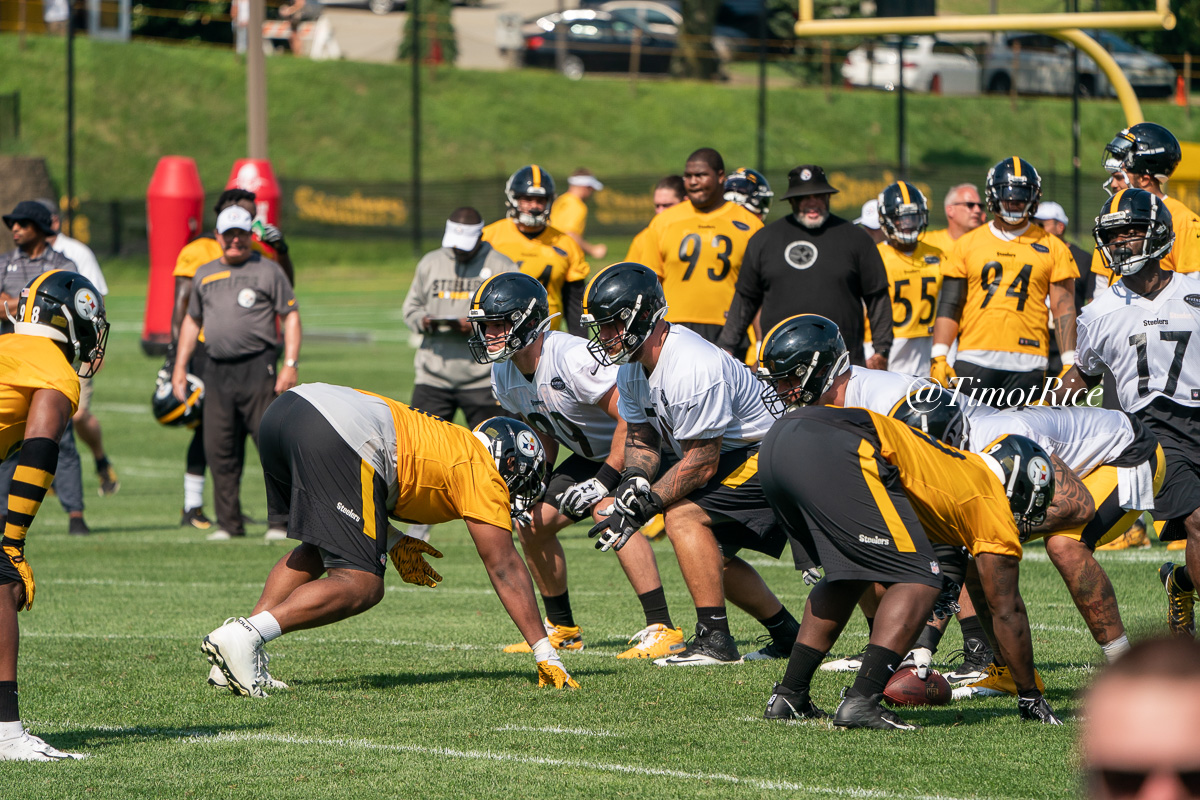 Know we’ve been throwing a lot of information your way the last 48 hours. And I said the first two days, with the team still in shorts and shells, are more about figuring out where guys are lining up.

To hopefully make that a little clearer, here’s a rough depth chart of how the first two days of camp have gone. This is not set in stone, things can and will change and some position groups are a lot more fluid than others. But this is a more efficient way than listing some of the odds and ends in our camp notes.

So here’s how things look.

Expect Dobbs and Rudolph to continue flipping between 2nd and 3rd team. More chances open up when Roethlisberger gets days off (like he might later this afternoon). But Dobbs began Day One as the #2 so the slight edge currently to him. Still an open competition.

Gets messy once you’re past Conner and Samuels. Haven’t run the ball much either to make me include these guys in my notes. Have not seen much of Wililams and McMillan. If injuries happen elsewhere, one of those guys may be shown the door. Only had six backs in camp to start last year, not including Le’Veon Bell.

Same thing. Messy past McDonald and Grimble. And with multiple tight ends on the field, it’s really hard to get a feel for this stuff. But this is roughly how it looks.

Ok, this is the ugliest of them all because these guys mix and match so much. Sure, Switzer is listed as third team slot which looks bad but he gets burn with the first team and way more reps than Griffey and Jones. Spencer has lined up everywhere while Smith-Schuster will be the starting Z receiver in two receiver sets. And I don’t even have Johnny Holton listed since I’ve only seen him practice one day. This is a total outline of how things are going so don’t get carried away.

This group offering more clarity. After a week or so, these guys will start moving around but for the first two practices, this is how it’s been.

Ditto here. Some more mix and match in nickel defense but their base 3-4, this is how things look.

Leaving TJ Watt off this list, obviously. JT Jones was the biggest benefactor, jumping into the 2nd team. The two rookies, Smith and Skipper, make up the third string.

Not even going to list one of Barron and Bush 2nd string because they’re all just rotating in with the first team. Barron has been “ahead” of Bush but it doesn’t mean a whole lot right now.

Sutton has worked between right corner and slot. Burns on the left side after playing right corner for most of his career. Don’t have Alexander Myres listed since he’s yet to practice. Potential IR candidate if he can’t get right soon and they need to make a roster move.

Kelly ahead of Dangerfield is the notable move here. Sutton has been the dime defender with Allen getting backup reps. Not much meat on the bone for Branch and DAH.