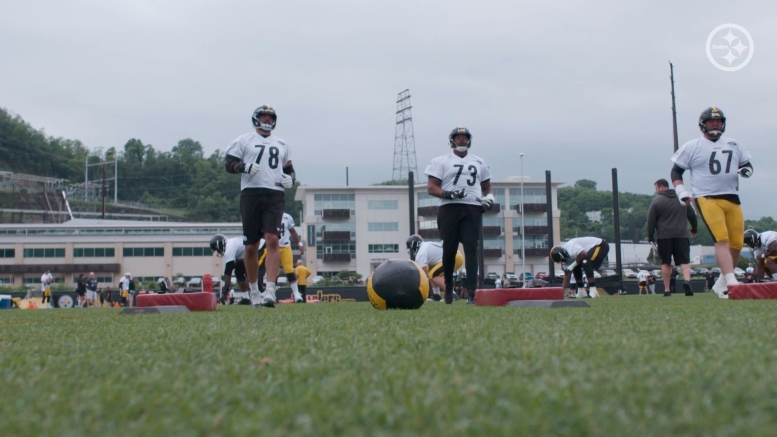 In spite of the fact that the non-football portion of the offseason was a rocky one for the Pittsburgh Steelers in the media, to say the least, now that the players are on the field, they all seem to be feeling good about where they are, in more ways than one.

While they are noticing the talent level that they still have around them—bolstered by free agency and high draft picks, as well as development of young players—veterans especially are also noticing a change in the ‘vibe’ in practices following an offseason with some pretty significant changes.

That would of course refer to, as Tunch Ilkin put it, the “diva dump”, trading wide receiver Antonio Brown to the Oakland Raiders and making no attempt to impede running back Le’Veon Bell’s quest for a contract in unrestricted free agency. Bell did not play last year, but Brown’s impact on the field in his absence has yet to be felt.

“We’re gonna miss that guy. We love everything about him. But of course at some point things end and we move on”, Ramon Foster said of Brown. “We’ve got to find a new thing. There’ll be another 73 here at some point. That’s just how it goes, you evolve. And him being him, a savvy, future Hall of Famer he is, he’s gonna find a way to make sure he’s productive with his guys”.

Foster was sitting down for the team’s website with Mike Prisuta for a one-on-one player interview, and he followed up that comment by asking the offensive lineman to comment on something Alejandro Villanueva said to him. “Alejandro Villanueva last week said something about the change in attitude, atmosphere, vibe, whatever you want to call it. He said, ‘this is by far the most amount of positive change that I’ve seen’”, he said.

“You just see a bunch of guys that have their eyes open to everything around them, more than anything. And that’s being positive about what we have to do”, Foster said on that subject. “It’s been fun. It’s definitely been a change for us in a sense, but guys are locked into it. Guys are aware of what’s going on, aware of what’s happened. But guys are closer. We talk more, we engage more. Even just out here, the way we work is a little bit different, and that’s a positive thing”.

There’s certainly nothing wrong with positive vibes. It’s much more preferable to feel good about where you are and what you’re doing, and who you’re doing it with, than the alternative. But it won’t matter how great they all feel together if they don’t have enough talent to win games between September and February.