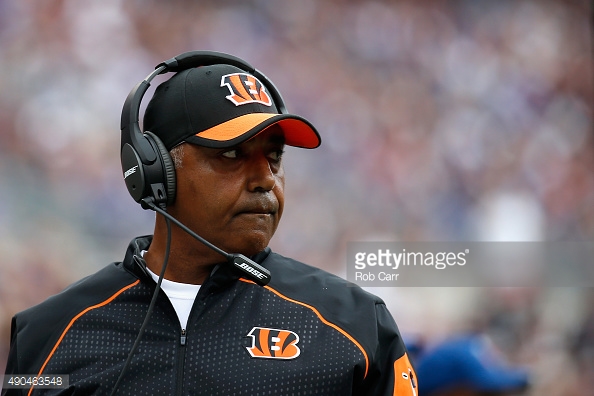 NFL coaching trees are nothing if not cyclical. It might be the only job in the world where someone can fail miserably, get fired, and have a host of offers waiting for him on the other side. So it’s possible Marvin Lewis, longtime head coach of the Cincinnati Bengals before being fired this year, would’ve had the chance to get back into the game. According to him, however, that’s unlikely to happen.

“I don’t think so. I’m fine,” Lewis told CBS radio, as transcribed by Cincinnati.com, when asked if he thought he’d become a coach again.

Lewis recently joined Herm Edwards’ staff at Arizona State as a senior assistant and consultant. Citing the long relationship the two have shared, Lewis said, “I envision just being another set of eyes, another set of ears, and doing anything I can to help the coaches. I was really impressed with the staff and what they accomplished after they hit the ground running last season.”

The Sun Devils went 7-6 in Edwards first year, exceeding most expectations after three difficult seasons under previous head coach Todd Graham. Wide receiver N’Keal Harry was drafted by the New England Patriots with the final pick of the first round, too.

In the CBS interview, Lewis went on to say he doesn’t miss the NFL. Hired by the Bengals in 2003, he helped turn the franchise around in a regular competitor. In his tenure, the Bengals finished above .500 six times and won the division four times: 2005, 2009, 2013, and 2015. But he never managed to win a playoff game, going 0-7. Twice, that included losses to the Steelers, a 31-17 defeat in 2005 – the Kimo Von Oelhoffen/Carson Palmer game – and the wild ending in 2015 which saw Pittsburgh come from behind in the game’s final moments.

Lewis’ first NFL job was with the Steelers, hired by Bill Cowher in 1992 to serve as the team’s linebackers coach. He left after the ’95 season to become the Baltimore Ravens’ defensive coordinator. After a brief stay in Washington, the Bengals hired him to replace Dick LeBeau.

He was fired after the Bengals slogged their way to a 6-10 record in 2018, their third consecutive losing season. That led Mike Brown, one of the most status quo owners in all of sports, to finally make a change, hiring Zac Taylor.

Assuming this is the end of Lewis’ NFL coaching career, he ends it with a 131-122-3 record. He more than doubled the wins of the next Bengals’ coach, held by Sam Wyche’s 61. Cincinnati is still searching for their first playoff win since 1990.