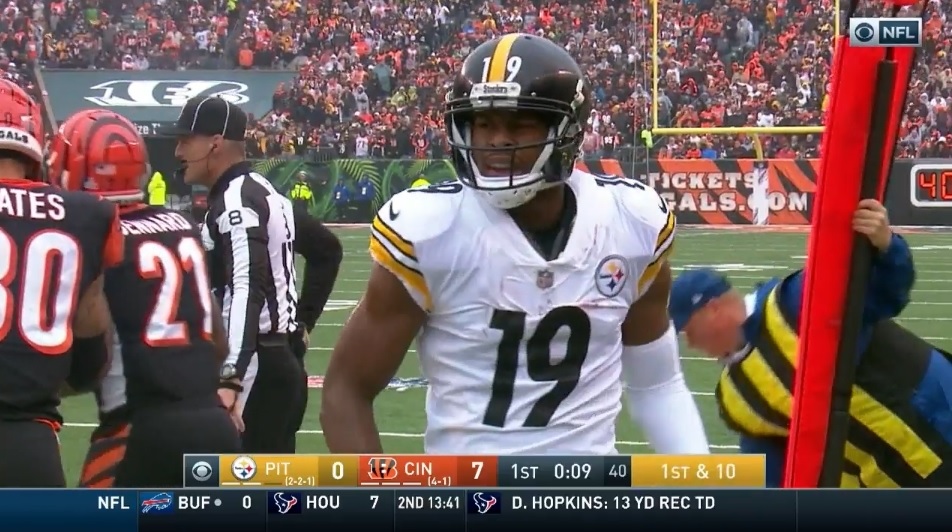 Pop culture fanatics may recognize those lyrics from Miley Cyrus and wonder what they possibly have to do with the Pittsburgh Steelers. The lyrics perfectly capture the impact the team’s own wide receiver JuJu Smith-Schuster has had since making his NFL debut. A surprise selection in the second round in the 2017 NFL Draft, Smith-Schuster has risen from promising rookie to second year stud over the last two years.

Smith-Schuster really put himself on the map last season, recording 111 receptions for 1426 receiving yards. Through two seasons, the Steelers wide receiver has now tallied 2343 career receiving yards which puts him in elite company. Listed below are the receivers with the most receiving yards after their first two seasons in the NFL. 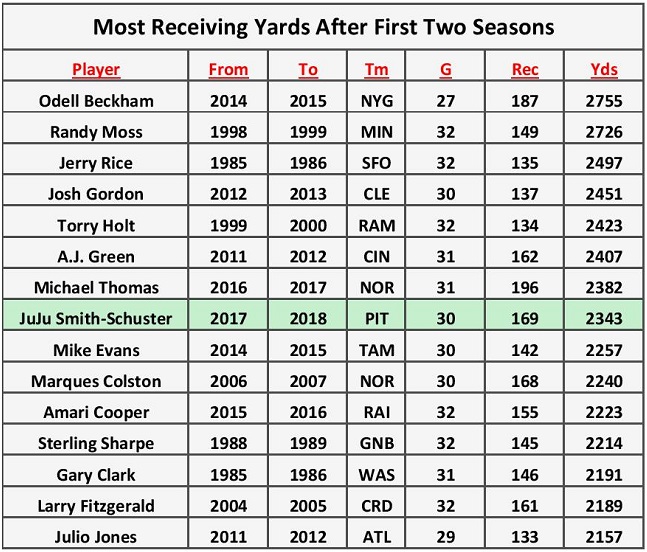 To be in the same company as Randy Moss, Jerry Rice and Torry Holt is certainly a big achievement for Smith-Schuster. The 22-year old Steelers’ receiver has recorded more receiving yards through his first two seasons than the likes of Larry Fitzgerald, Julio Jones, Calvin Johnson and Isaac Bruce. Just over a handful of receivers can say they have matched or out produced the Steelers’ receiver on the field through their first two seasons.

Since coming into the NFL, Smith-Schuster has been targeted 245 times and there is good reason for that. The Steelers receiver has developed into a reliable pass catcher who has made more than a couple impressive grabs thus far. Out of all wide receivers with at least 200 targets after their first two seasons, Smith-Schuster’s catch percentage of 69-percent ranks third all time (PFR has only been calculating targets and catch percentage since 1992). 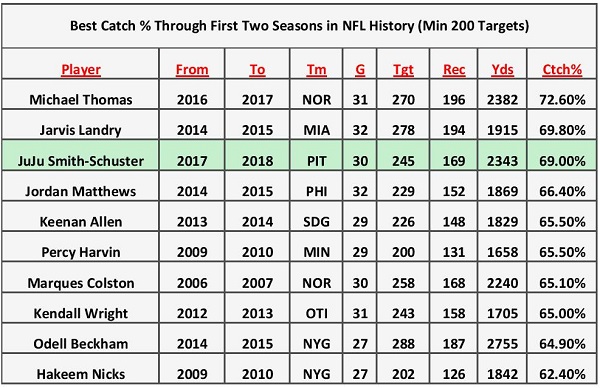 Few people, if any, likely imagined that Smith-Schuster would have put up the numbers he has produced when he was drafted out of USC two years ago. If there was a glass ceiling on his potential, the Steelers receiver has certainly smashed right through it. Still just 22-years old, the best may still be to come for Smith-Schuster but now, entering his third season, expectations will be higher than ever. The Steelers expect Smith-Schuster to rise to the challenge of being the team’s primary receiver after Brown’s departure. Brown’s departure likely means that the 22-year old will see more double teams and bracket coverage but if there is a silver lining to the situation, it is that Smith-Schuster has shown no problem shattering expectations thus far.