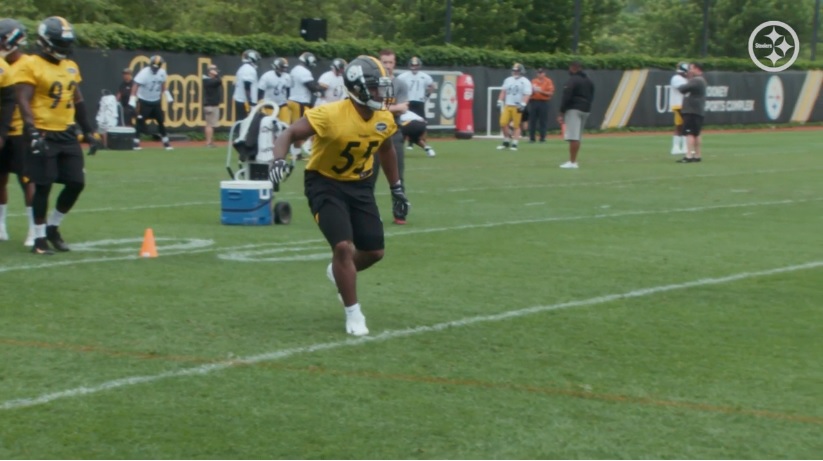 As a rookie, it’s easy to lean on the teammates you see the most. For Devin Bush, that’d be his fellow inside linebackers. The guys who play the same position, attend the same meetings, have the same background and stories that connect them. But Bush knows it’s important to learn from everyone. Sitting down with Steelers.com’s Missi Matthews in an interview posted earlier today, he said he’s picking everyone’s brain.

“Pretty much everybody,” he told Matthews. “I try to touch everybody. Ask them questions. From Cam Heyward, TJ Watt, Bud to Vince Williams, Joe Haden, [Dangerfield], a whole bunch of guys. Terrell, all those guys.”

It’s all valuable information and perspective. It’s notably critical for an inside linebacker and eventual signal caller of the defense. The defender wearing the green dot has to know the call and what everyone is going to do. The front, how the linebackers align off it, and how the secondary connects with the front seven in both coverage and run fits. The linebacker has to help the defense adjust to audibles, shifts, and motions that have become all too common in today’s NFL. That’ll be tested immediately in the regular season opener against the New England Patriots.

That game is on the road, which presents its own obvious challenges, but so do the home games. One element that doesn’t get talked about is the noise. When the opponent’s offense is on the field, Heinz Field is rocking to make it hard to communicate.. But the defense can be disrupted the same way. Having that clear, loud voice and a player who knows the roles of his ten teammates is vital.

Bush learning from everyone on his side of the ball is a proactive move and speaks to his football IQ. He again explained why siphoning info from everyone is so important.

“Just to get a sense of how different people think about the defense and how they go about learning it and playing professional football.”

It’s also a great way to establish yourself as a leader of the team. Bush won’t be that guy out of the gate, Cam Heyward remains the face of the defense, but players never earn the trust and support of their teammates if they never branch out.

Yes, it’s still June and you’d expect reports on virtually all first round picks to be glowing. Football in shorts and a time to be optimistic (even you, Giants’ fans). But every report on Bush and everything he’s said and done throughout the first six weeks of his NFL career echos what we heard and knew leading up to the draft. It’s hard to have a better start than that.