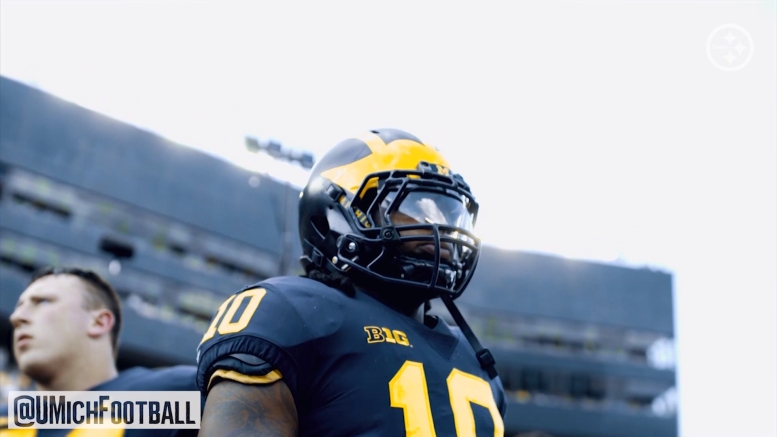 When the Pittsburgh Steelers made the decision to trade a myriad of assets in exchange for the ability to move up 10 slots in the first round of the 2019 NFL Draft to draft Devin Bush, they did so knowing about as much about a player as is realistic.

Defensive coordinator Keith Butler was on the Cleveland Browns’ coaching staff when his father was there. Mike Tomlin worked with Derrick Brooks with the Tampa Bay Buccaneers, who is Bush’s godfather and mentor. Devin Bush, Sr. even served as a coaching intern for one training camp in recent years.

In other words, they knew everything they needed to know about him not just as a player, but also as a person. They knew what he would bring to the team in the locker room as well as on the field as a leader in terms of his character.

One of his defining ‘character’ moments during his college career was during a key rivalry game against Michigan State, during which he began to rip up the middle of the field with his cleats during pre-game warmups after he felt that Michigan was being disrespected.

Bush was recently asked about that incident on The Fan and how he felt that represents himself and what he brings to the team. “It just goes to show I’m very fiery. I’m not saying I’m out of control or I can’t control myself”, he said. “I just stand up for my team and take care of my teammates. I’m not gonna sit here and let a team come in and disrespect my teammates with all the work we put in and the goals we’ve got”.

“Bringing that to the Steelers, it’s like, ‘hey, I’m a guy that stands for something, so I’m not gonna let anybody try to do whatever they want to do to my teammates, they feel like they can do this or do that’”, he added. “I’m gonna stand up for mine because we worked hard, and it’s a whole brotherhood thing”.

Now, I don’t think the team is looking forward to him ripping up any other team’s logo, but they do probably appreciate the sentiment behind it. Bush can be an energy-bringer and an enforcer, one of the players who define the team’s identity.

Of course, before he can do all of that, he has to make a name for himself, starting with earning a starting job. It seems as though he is on track to do that sooner rather than later, but anything he does outside of the context of game holds a lot more sway after he proves himself on the field.