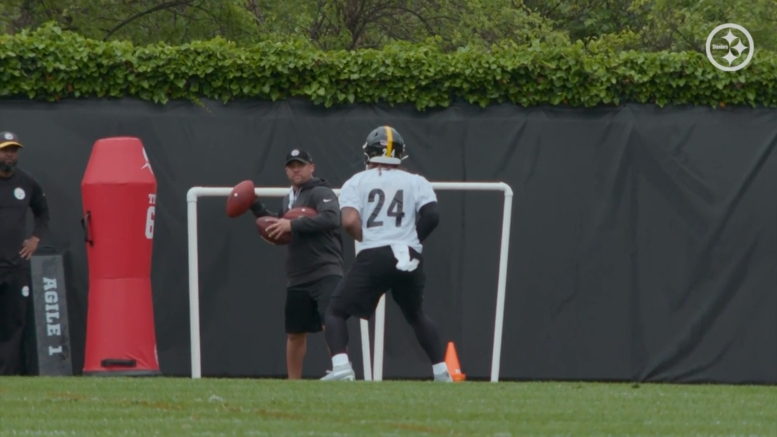 Short of team mascots, I think you would be hard-pressed to find somebody who outwardly seems to enjoy participating in the game of football, even on the practice field, more than Pittsburgh Steelers rookie running back Benny Snell. That is, after all, one of the qualities that drew the Steelers to him and coaxed them into drafting him in the fourth round.

Snell was a high-volume producer on the ground for the Kentucky Wildcats at the college level, and he was happy to do it, not just because he simply loves to play, and to be the guy that others count on, but also because he felt the connection to his teammates, that they were playing for one another.

And he says that he is feeling that in Pittsburgh already as well.

“After a certain play others besides [James Conner and Jaylen Samuels] will say something”, he said after a recent OTA session last week. “I have linebackers and defensive backs correcting me. It’s like a brotherhood. Like it was in Kentucky. I felt comfortable there and I feel comfortable here”.

The fact that the running back room is all very close in age is probably a part of that. Conner is only entering his third season after being selected in the third round in 2017. Samuels was a fifth-round draft pick last year, with Snell being added in April in the fourth to give them a trio of young mid-round backs whose skill sets, they hope, can complement one another.

Though he was welcomed with open arms, not just by the young running back group but by the team as a whole, he admitted that he wasn’t sure what he should expect, shifting from the ‘student athlete’ to the world of business and professionalism. Turns out, there is still a love for the game and camaraderie in the NFL as well, at least in Pittsburgh.

“It is surprising. You would think some guys would want to just handle their business and be isolated”, he said. “I know from personal experience, coming from a program that wasn’t much to something that is big, that is how you make it far and take it places when everybody is on the same page, wants to get better. Everyone is helpful. It’s a great team environment. A great feeling”.

While he is fitting in well in the locker room, or so it seems, there will still have to be an adjustment period to figure out when and where he can be best used on offense. Conner was a Pro Bowler last season and Samuels had moments of success as well. And the Steelers are not traditionally a team that relies on a platoon at the position.