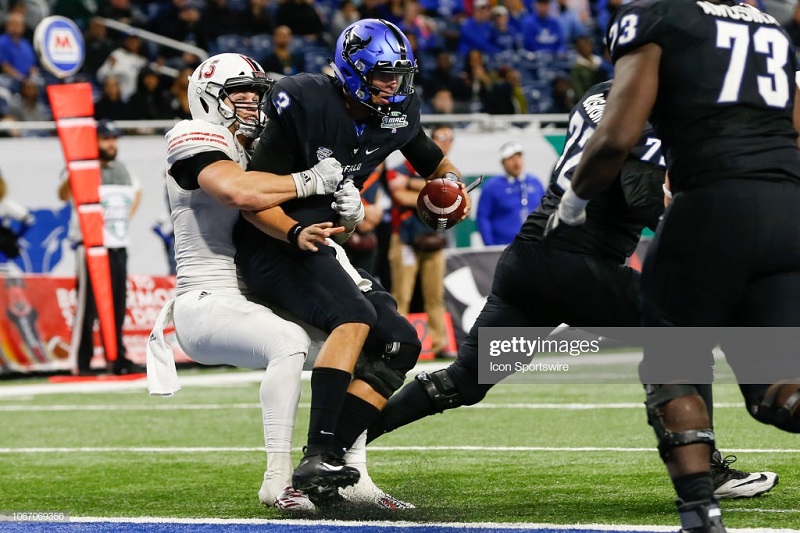 The Pittsburgh Steelers selected Northern Illinois defensive end Sutton Smith in the sixth-round of the 2019 NFL Draft and he’ll now be expected to compete for an outside linebacker position the remainder of the offseason. While undersized at 6003, 233-pounds, Smith still managed to register 30 sacks during his college career at Northern Illinois and that number includes 15 in 2018.

As part of my initial breakdown of Smith’s college career tape, I first wanted to study his 30 sacks to better contextualize how he won on those plays and against who. Despite Northern Illinois not having a lot of their full games on the internet, I was still able to find all of Smith’s 15 sacks from the 2018 season and below is quick contextualization of them all so you can see exactly how he won.

Smith’s first sack of 2018 came against Iowa and it included him taking the long way around the corner to the quarterback after beginning his rush on the right side of the Northern Illinois defensive line. Smith goes way up and around the arc against the Iowa left tackle and helping running back and ultimately finds himself the quarterback, who is drifting back out of the pocket because of pressure coming from his right. This sack is more effort and than anything as the quarterback had more than enough time in the pocket. The sack does, however, result in a strip of the football.

Smiths second sack of 2018 came against Utah and this one is yet another long snap to takedown time. On this sack, Smith rushes from the left side and his sensed pressure from behind seemingly forces the quarterback to start scrambling to his left. Smith, however, relentlessly pursues and finally gets the quarterback down for a sack.

One the higher quality sacks that Smith had in 2018 came against Utah. On this second one that he had in that game, Smith got a great jump on the left tackle at the snap of the football. His ability to get low and bend the corner makes it hard for the Utah left tackle to defend the Northern Illinois pass rusher and it quickly ends with Smith sacking the quarterback low and on his blindside.

Against Florida State, Smith registered his fourth sack of 2018 and this one came with him starting his rush on the left side. He easily beats the Florida State right tackle around the edge and quickly flattens to find the quarterback. Smith also manages to strip the Florida state of the football and the Northern Illinois defense recovers it.

Smith had another quick and higher quality sack against Eastern Michigan. On this sack, it looks like Smith has a quick hand swipe move before beating the left tackle to the edge. As you’ll see several times in this 2018 sack contextualization of Smith’s, once he gets the edge he can quickly flatten and bend to give himself a great angle at the quarterback.

Against Ohio in Week 7, Smith registers himself another two sack game. The first included him easily beating the right tackle to edge with a little dip and scoot following a quick get-off. The right tackle barely got a hand on Smith

A deep quarterback drop combined with Smith once again easily beating the Ohio right tackle around the edge results in Smith’s second sack of the game.  This time, however, Smith strip sacks the quarterback and recovers the loose football himself. He was virtually untouched on this sacks as well.

Against Akron, Smith registered an effort sack after first having his power rush attempt thwarted by the right tackle. The interior defensive pressure from the Northern Illinois defense forces the Akron quarterback to attempt to scramble up the middle and Smith was able to break free from the right tackle quick enough to record the sack on a 3rd and 17. This was roughly a 5-second sack, however.

Smith had yet another strip sack in the Northern Illinois game against Toledo and once again from the left side. Once again,. it appears as though Smith did a great job of swiping down the tackles arms on his way to the edge. Once he gets the edge, he can dip and bend it easily and quickly flatten to get on level with the quarterback.

Smith had 4 sacks later in the season in the Northern Illinois game against Western Michigan. His first of four, however, included him being unblocked and he didn’t take the play-action cheese once in the backfield. This might have been Smith’s easiest sack of 2018.

Smith’s second sack against Western Michigan came with him once again rushing from the left side. Smith once again uses his own hand swipe to knock down the hands of the right tackle. Once even he turns in his right shoulder and yet is still able to bend the corner and flatten to give himself a great shot at the quarterback.

No, this is not a repeat of an earlier sack in the game from a reverse view. The little man sure likes using that two-hand swipe to keep the tackles from getting their arms on him. Swat, dip, bend, flatten, profit.

That poor Western Michigan right tackle. at the snap of the football, Smith seemingly has to respect the run first as it’s a 1st and 10 play with the game tied later in the fourth quarter. Smith engages the right tackle at the snap and then quickly slips by to the outside of him once he recognizes the quarterback still has the football. The quarterback didn’t have time to get the football out to his right after not liking his first read to his left.

Smith had two more sacks in the MAC Championship game against Buffalo. Watch him flatten along the goal-line quickly after beating the right tackle around the corner. Buffalo appeared to be running four verticals on this 2nd and 8 play with the running back serving as a possible dump-off safety valve.

Smith’s final sack of 2018 was all effort. He finally tracks down the scrambling Buffalo quarterback roughly 10 seconds after the ball is snapped. Smith shows his quick bursts at the end of this play.

Summary: As you should be able to tell by watching all 15 of Smith’s sacks from 2018, he mostly won with speed, agility and effort. As far as his winning pass rush move, it’s probably his two-handed chop/swipe followed by him dipping and then bending the corner. Obviously, and as expected, you don’t see Smith winning with power. That’s just not his game as he’s just not big or strong enough to bull rush tackles consistently. As the offseason progresses, I will attempt to find Smith’s sacks from 2017 and 2016 and see how they compare to his 15 from 2018. I’m betting we’ll see the same kind of sacks with half being high quality around the edge with the other half being effort sacks.