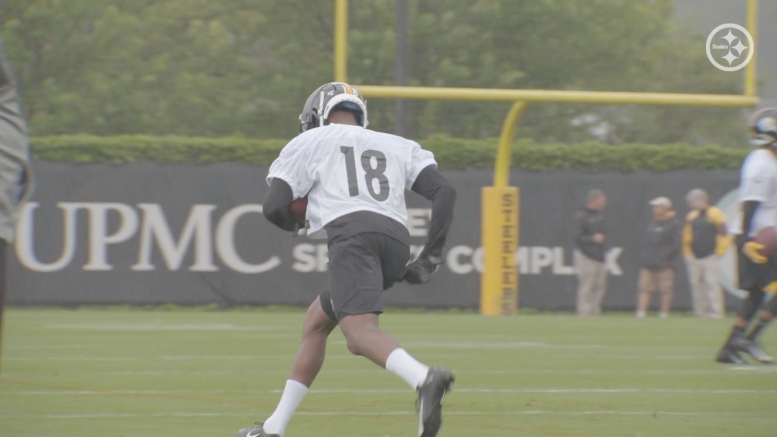 The Pittsburgh Steelers second week of 2019 OTA practices will come to a close on Thursday and while it’s incredibly hard to tell how the younger players are progressing in their development during the annual football in shorts sessions, at least it sounds like a few of them aren’t as overwhelmed as they may have been during the first few sessions. Rookie wide receiver Diontae Johnson, the teams’ first of two third-round draft picks this year, appears to be at least one young player starting to settle in nicely with the OTA process.

“Everything is starting to slow down for me a little bit,” Johnson said after a practice, according to Joe Rutter of the Pittsburgh Tribune-Review. “The first week was kind of fast. I’m like, ‘It’s a lot.’ I’m taking it in slowly.”

Johnson being a bit overwhelmed the first week of OTAs and finally having things slow down during the second week is provably a common occurrence not only with the Steelers, but around the entire NFL. That said, it’s always good to hear a player say that’s the case.

According to Rutter’s report, Johnson apparently claimed that his best OTA practice time to date has come early in sessions when gets to work more in individual drills with starring quarterback Ben Roethlisberger.

“He brought me over to get the routes and timing down with him,” Johnson said, per Rutter’s report. “I want to show him I can run good routes and be consistent.”

Interesting enough, Steelers veteran tight end Vance McDonald recently commented on the progress that Johnson has made thus far during the team’s OTAs when he recently addressed assembled media members and he even brought up how the Toledo product has gotten to work some with Roethlisberger.

“He’s sort of like this wildcard that Ben kind of throws in every now and then to just sort of see how and feel what he can do,” McDonald said of Johnson, according to steelers.com. “But I think the guy can fly, so it’ll be fun to see him light up I think in preseason.”

Johnson said early on in OTAs that he’s mostly working on the outside and that’s not overly surprising being as he’ll likely best fit in initially with the Steelers at the X position. Even so, Johnson also played some in the slot while at Toledo. His ability to quickly separate from all types of coverages quickly off the line in college might be the best in this year’s wide receiver draft class. Even if that’s true, it’s hard to imagine him getting too much playing time in the Steelers offense during the first quarter or half of the regular season.

In case you missed it, Mike Clay of ESPN.com recently released his early individual player stat predictions for the 2019 Steelers and he has Johnson catching 28 passes for 354 yards and a touchdown in his rookie season.

It will be interesting to hear what Darryl Drake, the Steelers wide receivers coach, has to say about Johnson’s progress when he next meets the media and that’s likely to occur sometime during the team’s mandatory minicamp in June. Until then, we’ll have to just assume that Johnson’s development is on schedule and continue to anticipate seeing him play quite a bit in the Steelers 2019 preseason opener against the Tampa Bay Buccaneers that will take place 10 weeks from tomorrow.