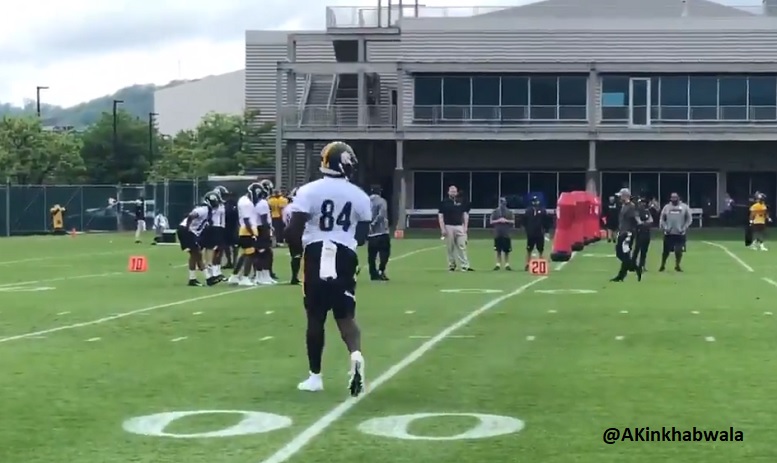 After trading away wide receiver Antonio Brown to the Oakland Raiders this offseason, the Pittsburgh Steelers wasted no time issuing the number he wore with the team since 2010, No. 84, to another player at the start of their 2019 rookie minicamp. In fact, they even issued that number to a player who is participating in this year’s rookie minicamp on a tryout basis. That player is none other than tight end Milan Richard, who played his college football at Clemson.

Richard has no problems filling out the Steelers No. 84 jersey as he reportedly measured in at his Clemson pro day a few months ago at 6025, 255-pounds with 34 1/4-inch arms and 9 1/2-inch hands. You can see him going through the motions during Friday’s rookie minicamp practice below.

Well, it didn’t take long to hand out that no. 84 jersey. It’s a mite bigger this year… #Steelers #rookieminicamp pic.twitter.com/zrFNkQxqDY

After being redshirted by Clemson in 2014, Richard went on to see action in 58 total games during his college career on his way to registering 25 total receptions for 269 yards and two touchdowns. 18 of those receptions came during the 2017 season. So, as you can probably tell by looking at his career college stats, Richard was primarily used as a blocking tight end in Clemson’s run packages as well as some in pass protection.

Richard has an interesting football bloodline worth mentioning as well as his mother is the younger sister of Herschel Walker, a former NFL running back who won the 1982 Heisman Trophy award with Georgia. In summation, Richard is Walker’s nephew. Not only that, Richard’s parents, Bill and Veronica Richard, were both track All-Americans in 1981 and 1982, respectively, at Georgia. His father specialized in the 110-meter hurdles, while his mother was a standout sprinter.

With Richard being a strong blocker in college and him also having some experience when it comes to playing on special teams, perhaps he’ll be able to show enough during the Steelers three-day rookie minicamp to warrant the team signing him to their 91-man roster. After all, the Steelers are tight end poor right now with the current depth chart consisting of Vance McDonald, Xavier Grimble, Kevin Rader, Christian Scotland-Williamson, Trevor Wood and Zach Gentry, the Steelers fifth-round draft pick this year. Quite honestly, Richard might very well be the third-best blocker of that group.