Are you currently thinking that the Pittsburgh Steelers might dip back into free agency with the draft now behind them and the annual compensatory pick period ending on Tuesday? If you have been excited the last few days by blog post from those who don’t follow the Steelers closely, in which the writers list several free agents the team should go after, you might now want to temper your expectations quite a bit. In fact, you should perhaps temper them a lot.

Since Kevin Colbert became the team’s general manager in 2000, the Steelers have a long history of not being very active when it comes to signing unrestricted free agents after the draft and prior to the start of the training camp. In fact, a quick search of online NFL transaction databases reveals the short list of players below who were signed by the Steelers as unrestricted free agents between May 1 and July 16 of any give year from 2000 and 2018. The list obviously doesn’t include undrafted rookie free agents.

As you can see in the aggregated data below, most of the players signed by the Steelers during this select time-frame were signed to one-year contracts for the minimum they were allowed to earn. Most of those players also wound up being cut before the start of that particular regular season.

The Steelers entered Monday with $4,816,131 in available 2019 salary cap space, according to NFLPA website and when you consider that a good portion of that will go toward the signing of this year’s draft picks and undrafted free agents, there won’t be much left to sign additional outside unrestricted free agents with and especially if those potential additions are wanting more than a one-year minimum salary benefit contract, as those come with reduced salary cap charges.

In closing, while you take a look at some of the more talented names of players still on the open market such as safeties Tre Boston and Eric Berry, you should probably plan on watching them sign with other teams between now and the start of training camp.

By the way, how many of you remember who Gabe Northern was and when he was signed?

Let me know if you think I missed a player who belongs on the list below and I will add it. 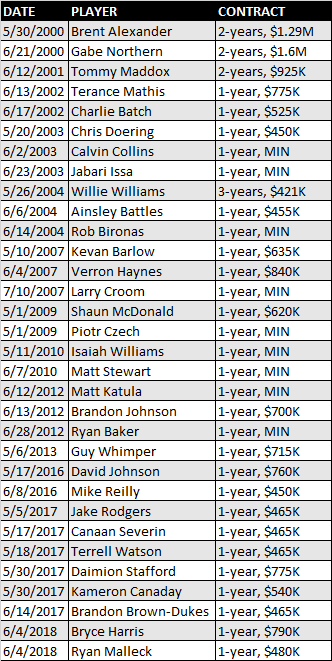