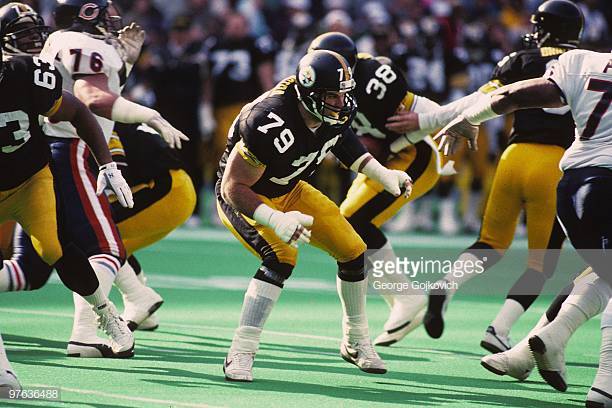 It’s pretty rare to see the Pittsburgh Steelers pick in the top ten. This draft was only the second time it occurred in Kevin Colbert’s long-tenure. Ever since Chuck Noll arrived, it’s become much more common to see the team turn their draft card with a pick in the 20s. So with the team being aggressive and moving up to #10 to select Devin Bush, a brief history of the other top 10 picks the franchise has made since Noll was named head coach in 1969.

The face of the franchise and cornerstone of the first four Super Bowls. It’s hard to fault what the Buffalo Bills did at #1, taking OJ Simpson, but the Atlanta Falcons and Philadelphia Eagles passed on Greene. Noll swooped in to take the dominant North Texas product, even if most in Pittsburgh didn’t have a clue who the team was getting.

Greene embodied everything about the culture change that took the Steelers from lovable losers to dynasty. Toughness, physicality, a hatred of losing. 10 Pro Bowls, four-time All Pro, and first ballot Hall of Famer in 1987, he became the second Steeler to have his number retired alongside fellow defensive linemen Ernie Stautner.

Despite taking Terry Hanratty in the 2nd round the year prior, Noll wouldn’t pass on Bradshaw. The early years were difficult, Bradshaw didn’t always play like a Hall of Famer, but once the light came on, the Steelers had their quarterback. While the first two Lombardi’s were based around a run-first offense, the passing game opened up for the latter two. Bradshaw’s bomb to John Stallworth to beat the LA Rams in 1979 remains one of the most iconic plays of their Super Bowl run.

Without Greene and Bradshaw, the Steelers would’ve been lucky to win a Super Bowl, let alone four.

The final time of the 70s Noll would choose in the top ten, still much of the groundwork for the dynasty not yet set. Lewis wasn’t on the team for the latter two Super Bowl wins, that itself an interesting story. Pittsburgh traded him to Buffalo for TE Paul Seymour but Seymour failed his physical due to arch problems in both his feet. So he was returned to the Bills, the papers said Pittsburgh would receive another player or draft picks, but it’s unclear if they ever did.

Back to Lewis. While he was stuck in a run-oriented offense, he was second on the team in receiving in 1972 and 1973 and led the Steelers in ’74. Regarded as one of the fastest players on the team with an old-school, Hines Ward mentality, he finished his time in Pittsburgh with over 2000 yards receiving and 16 touchdowns before flourishing in Buffalo.

No, he wasn’t Greene or Bradshaw. Not even close. But he was a solid pick who helped the team discover its winning ways.

Had cornerback Rock Ya-Sin really been the Steelers pick at #20, he wouldn’t have been the first Temple Owl the team drafted in the first round. Rienstra played for the Owls before becoming the 9th pick of the ’86 draft. Unfortunately, Noll’s draft success in the 70s didn’t carry over quite the same into the new decade. Reinstra falls into that group, making 27 career starts in five years before playing in Cleveland for two more.

Nicknamed Rhino for his weight room work ethic, many believe the pressure of being a top ten pick led to his downfall. An excerpt from this “Where Are They Now” segment from the Pittsburgh Sports Report in 1998.

“Coming out of Temple, Rienstra had been tagged by then-Steelers offensive line Coach Hal Hunter as the next John Hannah, the Patriots’ Hall of Fame guard. And he did whatever he could to making those predictions come true, even when his first day at rookie camp produced a broken foot. A 24-day holdout that resulted in Chuck Noll labeling him a wasted pick followed.”

Noll followed up a miss with one of his best hits, selecting Purdue’s Woodson a year later. There’s not much more to say that hasn’t already been said. Versatile, fast, a dynamic defender. It’s a shame his Steelers’ career lasted *only* ten seasons. Those ten years included 38 picks, 16 forced fumbles, six defensive touchdowns, and another four in the return game. Home run pick.

Worley was supposed to be the next great back in franchise history. Sadly, that didn’t happen. His first year was his best, rushing for more than 700 yards and five scores as a rookie. But Merril Hoge claimed the starting job and in 1992, Worley was suspended by the NFL for missing drug tests. Couple that with injuries and a nasty fumbling habit, the Steelers shipped him out to Chicago for a 5th round pick. He saw mild success in 1993 before falling out of the league two years later.

The most recent top ten selection until Bush was drafted last week. Colbert’s first ever pick as a member of the Steelers and it was, for the most part, a good one. Six strong seasons, making a great duo with Ward, and recording a pair of 1000 yard campaigns. He was gone a year prior to the Steelers winning one for the thumb but wound up getting a ring with the New York Giants, their leading receiver in 2007. Burress circled back and caught three passes for Pittsburgh in 2012.