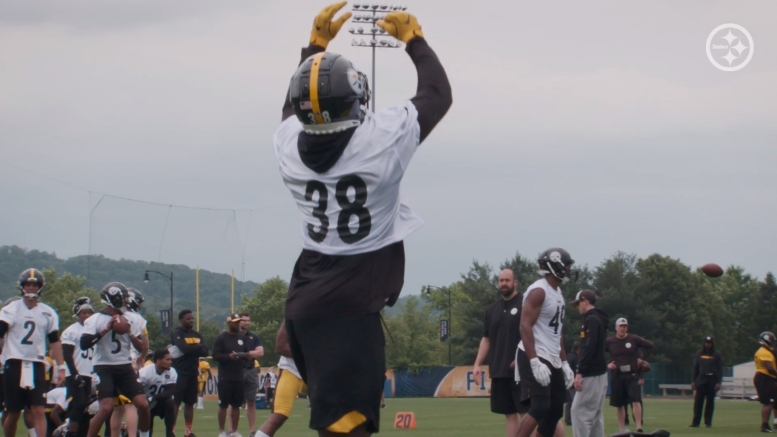 Jaylen Samuels spend more time catching the ball than running with it during his college career. He set a North Carolina State school record with his 201 career receptions, averaging 65 per year over his final three seasons, versus 182 total carries. In his first season with the Pittsburgh Steelers, he still caught 26 passes in relatively limited work, including three starts, and produced all three of his touchdowns on receptions.

Samuels lacked a true position in college. He wasn’t exactly a running back. He wasn’t exactly a tight end. He certainly wasn’t a wide receiver, but nor was he an h-back. With the Steelers, he is fitting into that running back role—even with Eddie Faulkner, his college position coach, now along for the ride—but his ability to make impressive catches continues to be one of his defining traits.

He was asked about his ability to make those highlight-reel catches in practice on a fairly regular basis that draw some attention and what more he has to show. “I just got to keep doing what I’m doing”, he told reporters, from the team’s website. “Every day, Coach Tomlin asks me what I got for him today, and I just say ‘every day it’s gonna be the same thing’. Just gonna come out here and try to make plays like I do, make the tough catches, and just try to help the team win”.

While he had his issues in pass protection—a flaw that he has vowed to put the extra work in this offseason to correct—Samuels grew to be favored in the passing game as the season progressed, even taking some snaps away from James Conner before the latter was injured.

But his hands were getting him noticed by his teammates long before that. Ramon Foster told reporters back in June of last year that he was catching his eye. “He’s made two or three combat catches in the end zone, back-shoulder fades and jump-balls where you’re like, ‘this kid’s got something,’ receiver stuff, which is huge”, he said, as I wrote last year. “He’s just so stoic, too. He’ll catch the ball and just go back like it’s work as usual. That’s what you have to appreciate about a young guy like that”.

A year later, the Steelers are practicing some reps with Conner and Samuels in the backfield together, a plan that both running backs have gone on record as being on-board with. The 2018 fifth-round pick has clearly made a strong impression on the coaching staff and should figure to get more opportunities in his second season.

Many of those opportunities could come in the passing game. Samuels is a route-capable player who would be a matchup issue out of the slot. They toyed with this in the preseason last year with another back in the backfield but never brought it in during a regular season game.