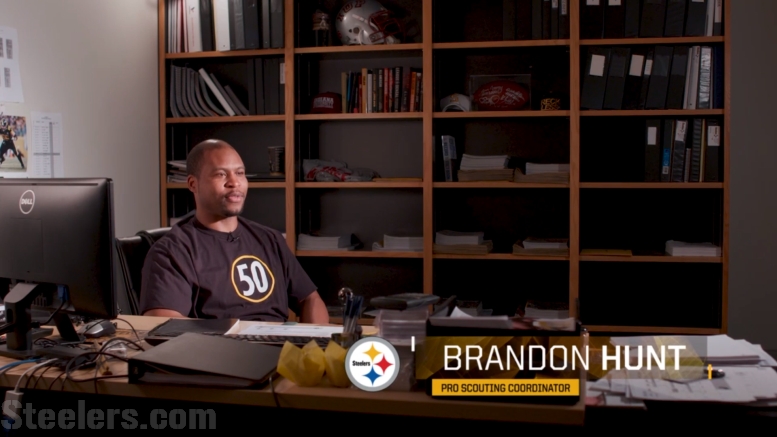 During the pre-draft process, we make a very strong effort on the site to track who shows up from the Pittsburgh Steelers at the various pro days with general manager Kevin Colbert and head coach Mike Tomlin being the main two focal points. In addition to attempting to track Colbert’s and Tomlin’s whereabouts throughout the pre-draft process, we also try to identify any dinners with prospects that might take place the evenings prior to pro days.

This year, however, we were only able to confirm the Steelers having dinner with Michigan linebacker Chase Winovich several months ago and since then we’ve learned that several other Michigan players were at that same dinner and that group of players included Devin Bush, who ultimately wound up being selected by the Steelers in the first-round of the 2019 NFL Draft following a 10-spot trade up with the Denver Broncos. Moving forward with the team, anytime we hear about one college player having a pre-pro-day dinner with the Steelers, we can probably assume that other players from that particular school were also in attendance based on what Brandon Hunt, the team’s Pro Scouting Coordinator, told Missi Matthews of steelers.com in a recent interview.

“We got a chance to go to his pro day, we met with him at the combine and the night before, when we get to different teams, we take out pretty much everybody that’s a prospect at the school, Hunt told Matthews while reviewing the long offseason courtship of Bush the Steelers had. “So, we got a chance to have dinner with him there. So, there was pretty good familiarity with Devin and by the time we took him in April.”

Hunt went on to confirm that the Steelers familiarity with Bush wasn’t something that just started this offseason.

“His [Devin’s] father is on staff of the University of Michigan and we had a chance to meet with him the 2018 summer training camp as he was one of our Bill Walsh minority summer interns,” Hunt said. “So, it can Kind of can go back to then, getting a chance to meet the family.”

While the Steelers already knew that they likely wanted to draft Bush this year, it also become quickly evident to the organization that they weren’t likely going to be able to get him at the No. 20 overall spot in the first-round.

“Devin was one of the guys we had way up there and it was one of those things that at 20 and how he worked and how his off season was, there’s probably no way we would be able to get him,” Hunt told Matthews. “So, it was really exciting to have had the opportunity to see a guy, in our opinion, who was potentially falling, and when it got to a point where we thought that we would have a chance to go get him and not mortgaged our whole future, but still be able to still have a chance to get eight more football players, we took advantage of that opportunity.”

Hunt went on to say that while there was quite a bit of anticipation and excitement in the Steelers draft room during that first-round, there was never any panic.

“And it was obviously really exciting in the room and we never ever panic in there,” Hunt explained. “There’s never any, like, ‘ah’ moments, but it was exciting. Obviously it got quiet because the phones started ringing and the energy kind of changes, but there’s never any panic. And when we had a chance to get to 10, I believe we traded with Denver, we moved into that spot. We took the player, there was a lot of excitement and high-fiving, but then obviously quickly switched back to business as usual.”

Hunt went on to reveal who in the Steelers draft room mans the trade offer phone calls that come in.

“On the phones, it’s myself, Kevin [Colbert], Mr. Art [Rooney] has a phone, and Omar [Khan],” said Hunt. “So we’re the ones involved in the trade calls and then Samir is who’s in charge of actually turning the trade into league via email.”