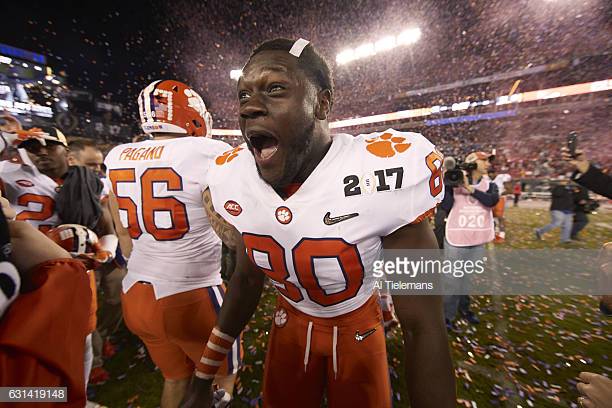 Friday kicks of the 2019 Pittsburgh Steelers rookie minicamp. Headlines and interviews will be grabbed by draft picks. At the bottom of the rung, but still no less critical to this weekend, are the tryout players. Yes, most will come and go and you’ll never hear their name again.

But history shows at least 1-2 of these players will be signed to the 90 man roster and carried through camp, whether that’s because of stellar play or injuries that open the door. Last year, Damoun Patterson became a mini-camp sensation before getting hurt at the end of the preseason. R.J. Prince was another name signed and remains on the team’s roster today. Past players like Marcus Tucker and Terence Garvin began their Steelers’ career as unknown tryouts.

Point is, all these players are important. They all have a shot and worked their butt off to even make it into a minicamp, something a very small percentage of college football players can claim. So let’s learn more about these guys.

Always tough for a quarterback to earn a contract, he’ll have to usurp Brogan Roback, but he has an interesting and productive career. Broke Steve McNair’s FCS record for pass yards, throwing for 14,584 yards in school. That record-breaking performance come on a 40/53, 404 yard victory over Eastern Tennessee State last November. Good athlete too. Ran 4.79 at his Pro Day, rushed for eight touchdowns as a senior. A little Ben Roethlisberger in him too; Hodges had 12 punts in 2018, landing three of them inside the 20.

Tennessee alum after spending four years at Stanford. With the Cardinal, he started six games as a junior in 2016, going 6-0. Threw for 905 yards and 10 touchdowns in 12 total games. But wound up losing the job to K.J. Costello after Stanford began 1-2 in 2017. Was actually picked off by Kameron Kelly, signed by the Steelers this winter, in an upset loss to SDSU that basically cost him his job. Appeared in eight games for the Vols last year, throwing three touchdowns. Uncle is Paul Chryst, who spent three years as the HC at Pitt from 2012 to 2014 before taking the same job at Wisconsin.

Squatty back and one several JMU backs who logged carries in 2018. Didn’t test very well at his workout (4.59 40, 30 inch vert, 7.19 three cone). 5th year grad student who averaged 4.5 yards per carry and five touchdowns. Best season came as a redshirt freshman, going over 1000 yards and 10 scores. Not much experience catching the ball; just ten receptions the last three years combined. Easy guy to root for. Tore both of his Achilles in college. Rehabbed and recovered each time.

Worked out at Northwestern’s Pro Day, where the Steelers sent at least one scout. Ran just 4.6 but showed some explosiveness with a 36 inch vert. Ran for 644 yards and seven scores in 2018 with 22 career scores. Also caught over 100 balls throughout his college career. Multi-sport athlete. Outfielder for the baseball team who at his best, hit .317 with 18 RBIs as a junior. Twice, he stole nine bases.

Capable of the home run play on the gridiron. 75 yard score against Youngstown State and a 65 yard rush against Indiana State in his final game.

Little-used tight end who profiles more like an H-Back in the NFL. Career high 18 receptions for 210 yards as a junior. Logged plenty of snaps, 900 of them his final two years, but used as a blocker in the Tigers’ offense. Has special teams experience as a blocker in the KR game. Top recruit out of high school. Mother and father were All-Americans in track at Georgia. Uncle is Herschel Walker (yes, that Herschel Walker). Ran 4.69 at his Pro Day.

Had several tryout offers. Was in Giants camp last weekend before coming home for this one. Believe he was at the PSAC Pro Day at St. Francis. Ran 4.54, jumped 33 inches, with a very nice 6.58 three cone. The Dukes all-time leader in receptions (190) and yards (2,719). 71 receptions and ten scores as a senior. Kick return experience, averaged over 26 yards per attempt as a freshman and sophomore. Cousin of Ryan Shazier.

Canadian product. Don’t have much info on him. Caught 49 balls for over 600 yards and five touchdowns as a senior. 22 career scores, including a 99 yard TD back in 2016. Also saw some work in the return game, both kicks and punts. Averaged 15 yards per punt with two scores in his career. Dad played in the CFL and NFL.

Ran 4.49 and jumped 37.5 inches in the vert at his Pro Day. Selected 13th overall by Montreal in this year’s CFL Draft where it’s rare for receivers to be taken that early (the first five picks were all linemen).

One of two Canadian linemen invited to tryouts. Came to Windsor as a 295 pound big ugly. Invited to Canada’s East/West Bowl last year but suffered a back injury and couldn’t compete. Lingered and he missed half the season. Called it the biggest obstacle he’s had to overcome. Was in rookie minicamp with the New York Giants last weekend but didn’t receive a contract. Selected 4th overall in the 2019 CFL Draft by the Winnipeg Blue Bombers. So if he doesn’t earn a contract in Pittsburgh, he’ll still be playing professionally.

The other Canadian offensive linemen in Steelers’ camp. He has one over on Desjarlais, taken 2nd overall in the CFL draft by the Hamilton Tiger-Cats. Invited to the CFL Combine (5.18 40, 26 reps on the bench). Black and gold are the same colors Waterloo wears. Lauded for his work ethic and academic success. Named 2nd Team All-Canadian as a senior. Waterloo o-line called themselves “The Herd.”

26 year old from BYU who was with the team from 2011 to 2015. 33 game starter for the Cougars at tackle. Top recruit out of high school. Signed with the Saints as a UDFA in 2016 but injured his knee on the first day of training camp. Spent the last two years in the CFL playing for Hamilton. Has a pretty legendary beard.

Funny enough, both of Maryland’s starting tackles from last season are in Steelers’ camp. Prince will join 7th round pick Derwin Gray for the rest of the weekend. Those two were viewed as leaders in the locker room and shared their backstories in this video for the team. Prince and Gray, as you’ll see, grew up only a couple blocks from each other. Now, they share an NFL locker room.

Came to Kansas by way of Cal after starting his career at a JUCO. 19 starts at right guard the last two seasons, one for the Golden Bears and then the Jayhawks. Tough upbringing. Foster child, brother killed in a bike accident, now trying to break into the NFL to support him and his daughter. Credits former NFL fullback Terrelle Smith as a mentor. Smith is the brother of former Steelers’ safety Da’Mon Cromartie-Smith. Put up 27 reps on the bar at his Pro Day. Trained with Tom Shaw in Orlando (Wallace was born in Florida) prior to April’s draft.

Memba him? Gilmore is back, I believe on tryout, after spending time in Steelers’ camp as a UDFA out of LSU last season. I originally pegged him as a sleeper but he turned in a very disappointing camp. Here’s what I wrote last August.

“Ugh. One guy I touted as a sleeper to make the 53, I couldn’t have been more off base. Gilmore has the look and size and…that’s about it. Fourth team nose tackle, as useless a title as “Assistant to the Regional Manager.” Barely enough reps to even offer a worthwhile evaluation. Likely he is cut outright.”

And he was cut outright. Gilmore ended up getting picked up by the AAF’s Memphis Express before the league folded. Now he’ll get another chance. Unusual path but players have made the team this way before. RB Cameron Stingily was in Steelers’ camp in 2015, got hurt in the preseason, cut, and then brought back in for a tryout after the 2016 draft. He made the team again. So don’t write Gilmore off.

2 1/2 year starter for the Ducks who left school with 17 TFL and 10 sacks. Also blocked two kicks. Played fullback and linebacker in high school while part of the track and field team (discus and shot put). UDFA who has spent time with Kansas City and New Orleans. Saints signed him back to their roster as recently as last December but wasn’t added to their offseason 90.

Listed as a rookie but actually came out of the draft in the 2018 class. Highly productive college player with 21.5 sacks, third most in Yale history. Racked up 11.5 of them as a senior and named finalist for FCS defensive player of the year. 37 career TFL. Football and track team captain in high school. Brother played at Yale years before and now works for Morgan Stanley.

Oplinger didn’t test well at his Pro Day. 4.77 40 and a 7.4 three cone. UDFA picked up by the Cardinals before getting cut at the end of the preseason.

Transfer from a JUCO, Monroe College, where he attended for 2014 and 2015. Slated to start in 2017 but only got a pair of games in before suffering a torn ACL running down a kick against Miami. Was able to earn a medical hardship waiver from the NCAA, allowing him to play in 2018. Third-team all conference finishing with 60 tackles, 8.5 sacks, and a fumble recovery in the end zone versus Ball State. Long, 33 inch arms, but the 4.89 he ran at his Pro Day is tough to stomach.

One-year starter who recorded 57 tackles and two interceptions as a 5th year senior for the Boilermakers. Invited to the Colts local Pro Day during the pre-draft process. Actually began his college career, albeit briefly, locally at St. Francis, before giving up his scholarship to walk-on at Purdue. Earned a scholarship there by the end of his junior year. Helped turn the program from lovable loser into a bowl winner. Ran in the 4.6’s at his Pro Day and may have to make a move to safety.

Good testing at his Pro Day, where Pro Scouting Coordinator Brandon Hunt was in attendance. 4.58 40 was below average but he jumped 36 inches in the vert, 10’10” in the broad, with a 6.75 three cone. Also put up 16 reps on the bench press.

16 career starts for the Terps, taking the JUCO route to get there. Worked as their nickel corner. Three interceptions last year with a pick-six against Ohio State.

Another walk-on who earned a scholarship for his outstanding play.

Local product. Pittsburgh native who played his college ball at Central Catholic where he was named to the Big 33 Team as a senior. Played safety and nickel back for the Commodores. Entered the draft last season. Made five starts in 2018 recording 29 tackles and three pass breakups. Didn’t appear to run at his Pro Day, only participating in the bench press (16 reps).

Goes by Tre. Spent time with the AAF’s Memphis Express earlier this year. Mother was a WPXI morning news anchor for 20 years.

Another local dude, growing up in Gibsonia, just a little outside Pittsburgh. Attended Mars High School. Once boomed a 61 yard punt in high school and like most specialists, an excellent soccer player.

Kicker/punter versatility but much more of the latter. 151 career punts with a 39.6 yard average. 28% of his career tries landed inside the 20. 19/29 on field goals but only had four attempts as a senior with a long of 31. Also handled kickoff duties.