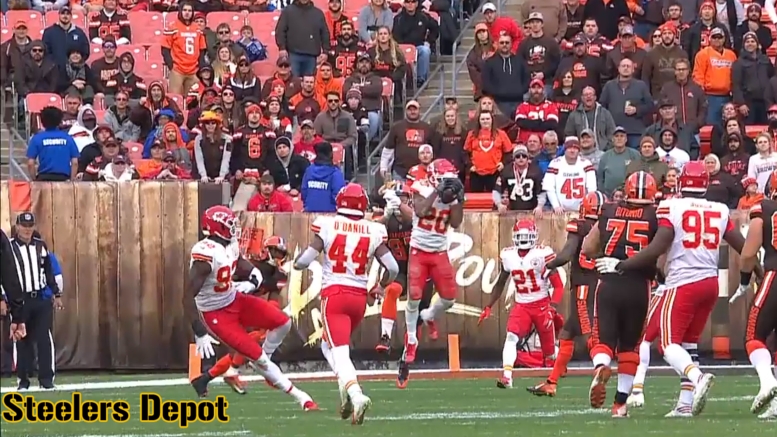 Nobody for the Pittsburgh Steelers recorded more than two interceptions during their—well, let’s just call it what it is—pathetic display of taking the ball out of the air last season. As a team, they managed just eight interceptions.

Steven Nelson, the cornerback that they just gave a three-year, $25.5 million contract, got half of that number all by himself last season. In fact, his four interceptions would be the most by any Steelers player in a season since Troy Polamalu had seven interceptions in 2010.

In fact, in the Mike Tomlin era, Polamalu, who did it twice, is the only player to have had more than three interceptions in a single season. And there have only been 14 three-interception seasons in that same 12-year span. Sean Davis and Ryan Shazier were the most recent to do it in 2017, and Artie Burns  and Shazier again did it the year before. Burns had had one since, and Davis had none last year.

So the notion of asking a player what his favorite interception was might be a little foreign for Steelers players right now, since it’s been rare for anybody to even have more than one. Nelson had one in mind from last season, however, and it came against an AFC North opponent: Baker Mayfield and the Cleveland Browns.

“Cleveland has to be my favorite because it kind of shows what type of guy I am, just that type of resilient type of guy”, he told Kristine Leahy on Fair Game last week (the episode is unfortunately no longer available online). “You never back down. Actually, a play or two before my interception, Baker Mayfield completed a big pass on me and it was a tight game. I just knew at that moment I had to make a play”.

“Everyone was kind of upset and they were in like, red zone territory, they were about to score”, he went on. “And next thing you know, I come up with the interception and we win the game. And all I remember is Andy Reid was like, ‘I was gonna kill you’. That’s what he said. He said ‘I was gonna kill you’, but he was like ‘great job’. Everybody was all celebrating”.

Truth be told, the Chiefs were leading by a score of 37-21 at the time with 4:39 to play in the fourth quarter, so it wasn’t quite that do-or-die, but it was a two-score game nevertheless. Nelson had just given up a 38-yard reception to Antonio Callaway to put the Browns on the 31-yard line.

The Chiefs sent a zone blitz after Mayfield, who rolled to his left and through into what looked like a crowd of three Browns targets, chiefly tight end Seth DeValve, but Nelson was able to leap in front of the pass to pull down the interception, at the time his second of the year.

The offense was very nearly able to close out the game, Mayfield getting a shot at just one more pass with seconds remaining. Nelson would get another interception in the following game before adding one more late in the year to give him four on the season. He’s hoping to match or better that in his first year in Pittsburgh.