Shot #1 – Will Michigan linebacker Devin Bush ultimately be the Steelers first-round draft pick this year? Will he fall to No. 20 overall? We have a little more than two weeks until we find out the answers to those questions but in the meantime, however, Jim Trotter of NFL.com has a very interesting story on Bush that was published this past week and I highly suggest reading it.

"I always wanted to ask him why he was always on me, but I didn't have the courage because I wasn't sure I wanted to hear the answer." How Devin Bush Jr. was pushed to greatness by his Super Bowl-winning father (by @JimTrotter_NFL)#BACK2CAMPUS: https://t.co/FHOgU9f5A7 pic.twitter.com/KfS0U8esoL

Shot #2 – The Steelers recently signed a few former AAF players to contracts and included in that group was former Alabama center/guard J.C. Hassanauer was one of them. Hassanauer, according to Pro Football Focus, graded out as the second-highest center in the AAF at 75.6 overall in his five games for the Birmingham Iron. PFF has the Week 1 game against the Memphis Express as Hassanauer’s best overall performance and you can re-watch that game on Youtube and the link is below.

Hassenauer graded as the second-highest center in the AAF at 75.6 overall in his five games for the Birmingham Iron. https://t.co/zvjJeIne9T

Thankful for the opportunity to fulfill one of my lifelong dreams to fly w/ @AFThunderbirds! S/O to my pilot, Maj. Jason Markzon (#8) & the entire crew. Thank you for your service & representing our country! Hope to fly again soon. Watch out…Astro coming to a sky near you!🇺🇸 🚀 pic.twitter.com/fGrQUDIJ3u

Shot #4 – Former Steelers wide receiver Troy Edwards is celebrating his 42nd birthday today. Edwards, in case you forgot, was the Steelers first-round draft selection in the 1999 NFL Draft out of Louisiana Tech. He was also the Fred Biletnikoff Award winner in 1998. Below is an article that Gerry Dulac of the Pittsburgh Post-Gazette wrote about Edwards not long after the Steelers drafted him. Click on the image for a larger version. 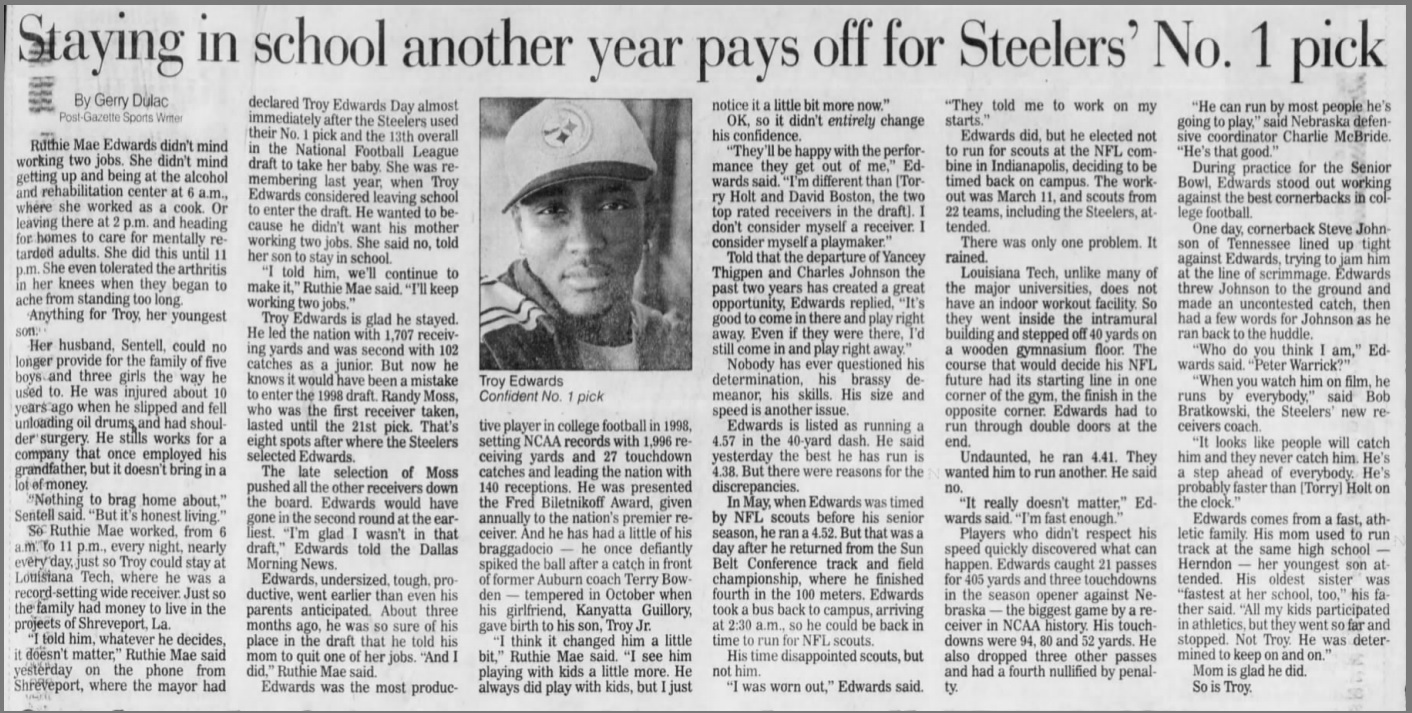 Shot #5 – Speaking of the Fred Biletnikoff Award, below is a list of the winners and finalist for that annual award along with the round each player was ultimately drafted in dating back to 2008. Notice that West Virginia wide receiver David Sills V was a finalist for the award in 2017 as he lost to current Steelers wide receiver James Washington. The Steelers are reportedly very interested in Sills this year, so dont be surprised if he’s selected by the team somewhere between the second to fourth round.

Shot #6 – Former Steelers defensive lineman Casey Hampton was recently roasted by a few of his former teammates as part of the annual Mel Blount Youth Home Roast and you can watch some video from the event from steelers.com and WPXI below. The event benefited Blount’s Youth Leadership Initiative and included Hampton being roasted by former Steelers Aaron Smith, Brett Keisel, Chris Hoke.

That is why he was the perfect person to roast at the 21st Annual Mel Blount Youth Home All-Star Celebrity Roast. pic.twitter.com/EJ1hV5dZV9

Shot #7 – What goes into creating a new NFL rule? Take a look below art the video from the league’s NFL operations department to find out the answer to that question.

What goes into creating an @NFL rule? Take a look: pic.twitter.com/apGnX81KJm