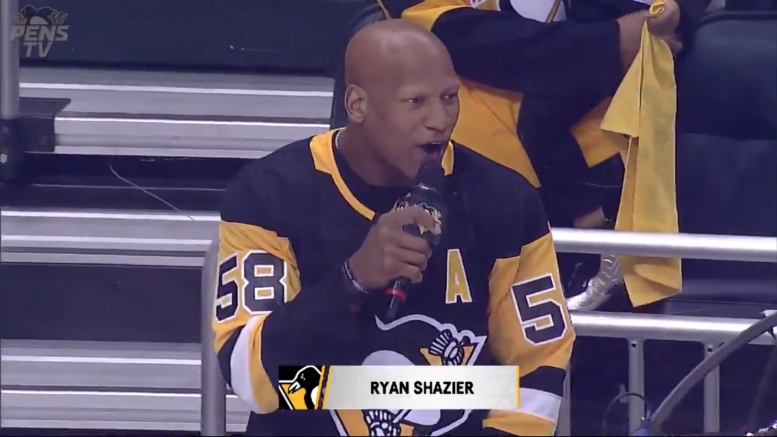 Under ideal circumstances, a player drafted to a team who plays its game in a region generally unfamiliar to him will be coming into a new environment which will become his second home—if not his true home for the long term. That has been the case for many Pittsburgh Steelers alumni, such as Jerome Bettis, who have created businesses in the area while setting their roots down.

One of the examples of current players who have fully adapted to the regional enigma that is western Pennsylvania is Ryan Shazier, the team’s first-round pick in the 2014 NFL Draft. While he is off the football field for now—just yesterday he was moved to the Reserve/Physically Unable to Perform List for the second consecutive year following his December 2017 spinal injury—he is still very much a part of the team, and of the community.

He said so himself last night while receiving the Bob Prince Award at the Art Rooney Award Dinner. The Bob Prince Award is meant to “honor someone who embodies enthusiasm for sports”, named after the late Pittsburgh Pirates radio announcer.

I think it’s fair to say Shazier very much embodies an enthusiasm for sports when you see how much he pushes himself to try to return to the field, all the while continuing to embrace every aspect of the game through every avenue that is made available to him—which have been many.

“I am thankful” to be the recipient of the award, he said. “I have been working my tail off through the good and the bad. They have been there for me. I thank them for all of the support they have given me. I am thankful they even thought about me for this”.

He added, “I consider myself a Yinzer. It means a lot because I know the whole city has my back in every form, when it comes to sports, life, on a daily basis. I am thankful he thinks I represent the city, and the sports here”.

He referring to Art Rooney II, who of course runs the award dinner named after his grandfather and his namesake, “The Chief”.

Though he knows the power of his progress and the inspiration and motivation that it can provide, Shazier has on occasion taken the opportunity to share the very personal and sometimes painful moments of his journey in realizing what he has lost and what he is trying to regain.

“It’s very difficult for me just being there. It motivates me and pushes me more and more every day”, he admitted, before explaining that the National Anthem has become an even more emotional experience for him in its symbolism for the beginning of a football game, which he now has to view as a spectator.

“My doctor said I am further than they expected me to be”, the linebacker continued. “The rehab, the recovery and the pace I have been doing, there are no doors closed. He said you have to keep working, keep grinding. How hard you work is a possibility if you can make it back or not”.

Shazier’s stated goal has been not only to return to the football field but also to be enshrined into the Pro Football Hall of Fame. He hasn’t lost sight of that goal.