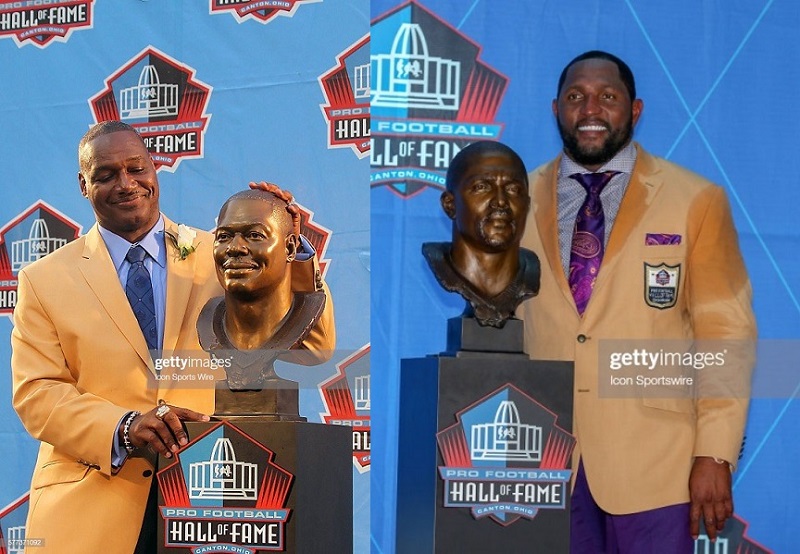 The Pittsburgh Steelers selected former Michigan linebacker Devin Bush in the first-round of the 2019 NFL Draft Thursday night and while everybody should know by now that he’ll bring with him to the Steel City an NFL bloodline, as his father was a former first-round draft pick of the Atlanta Falcons, the young player also has two mentors that he speaks to regularly who were linebackers in the NFL and who both are now in the Pro Football Hall of Fame.

Those two mentors are none other than Hall of Famers Ray Lewis and Derrick Brooks and Bush talked some about the relationship he has with both during a pre-combine interview with Adam Schefter of ESPN on his podcast.

Bush was asked to talk some about Lewis after first naming him as one of the three players he tries to model his game after.

“As a kid, I kind of modeled my game after three people, it was Clay Matthews, Ray Lewis and Patrick Willis,” Bush told Schefter. “That’s the three people I really wanted to be. So, I kind of model my game behind those three and kind of just do things in a similar way that they do it.”

Schefter then asked Bush in what ways he tries to model his game after each of those three players.

“I love Clay Matthews’ motor, I love his energy,” Bush said. “You know, I love what he brings to the defense and I love Patrick Willis’ sideline-to-sideline speed and his tackling ability and his playmaking ability. And I like Ray Lewis’ leadership and how he takes command of the whole defense and he’s just a true leader out there.”

Bush was then asked if he’s ever had a chance to meet Lewis, Clay Matthews or Patrick Willis and that’s when he revealed that the former longtime member of the Baltimore Ravens is a mentor of his.

After talking about Lewis being a mentor of his, Bush quickly revealed his connection to Brooks, who played his entire career with the Tampa Bay Buccaneers after being selected in the first-round of the 1995 NFL Draft out of Florida State, where Bush’s father, Devin Bush Sr., also played his college football.

“And Derrick Brooks is actually my godfather. So I talk to him also, too,” Bush told Schefter back in February.

After Schefter connected the dots that Brooks and Bush’s father both played together at Florida State, the young linebacker let it be known that his father and godfather were college roommates. Bush was then asked to reveal what he’s learned over the years from Brooks.

“He just talks about life, he’s a big life guy, big on the sports as well, but he’s just big on life,” Bush said of Brooks. “You know, this sport is almost like life, you’re going to have your ups and your going to have your downs. You’ve got to work through some things to get what you really want. You know, he’s just saying, like, ‘Keep your head straight, man, and always know what you want and always go for what you want.'”

It’s obvious that as Bush moves forward into his NFL career that he’ll have quite a support group off the field in not only his family, but in Lewis and Brooks as well. NFL football is definitely in Bush’s blood and he certainly has the on-the-field tangibles and athletic ability to play a very long time in Pittsburgh with the Steelers.