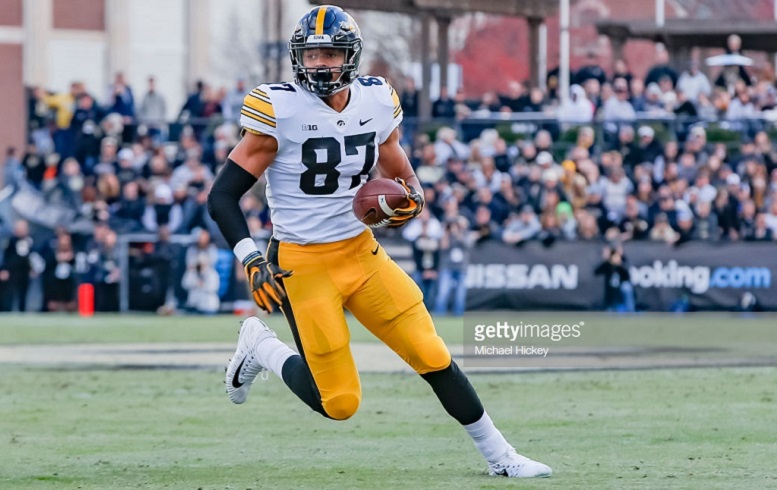 Earlier today, I posed the question of which potential first-round picks you would not want to hear called for the Pittsburgh Steelers tonight. I left out perhaps the name I most want to avoid hearing, and that would be tight end Noah Fant out of Iowa. Mike Florio of Pro Football Talk mocked him to the Steelers in his draft.

“With JuJu Smith-Schuster and James Washington on the outside”, he wrote, “a guy like Fant can draw attention to the middle of the field, opening things up for his teammates”. It might be a more convincing argument if the Steelers didn’t already have a top tight end in Vance McDonald who is also capable of doing that.

Pittsburgh is not looking for a new number one tight end after losing Jesse James in free agency. If they didn’t see McDonald as their number one, then perhaps they would have re-signed James, but they balked at his price.

I do think it’s virtually a necessity for the Steelers to draft a tight end, but it absolutely should not come in the first round unless it’s Fant’s teammate, and even at that, the round would have to break badly on the defensive side of the ball.

Even with the departure of Antonio Brown from the offense, the greater concern on the team remains on the defensive side of the ball, and there almost surely will be a defensive player who will play a bigger role available at 20th overall than any offensive player would. The Steelers already have all of their starters in place on offense. The only possible opening would be at wide receiver.

It is well worth noting that among the players who were still available in Florio’s mock draft with the 20th pick were cornerback Greedy Williams and inside linebacker Devin Bush. It would be frankly nothing short of stunning if Bush were on the board when the Steelers were on the clock and they didn’t select him. in fact, Florio had Bush lasting all the way to 28.

This is honestly a stunningly bad mock, at least relative to the Steelers, that shows a clear lack of research, because there is simply no way the team would draft the second tight end in the draft class over the second inside linebacker or the first cornerback off the board.

That’s right, no cornerbacks were taken in Florio’s mock by the time the Steelers selected. So he thinks they would pass up all the inside linebackers and cornerbacks barring Devin White in order to take Noah Fant. This is not going to happen.