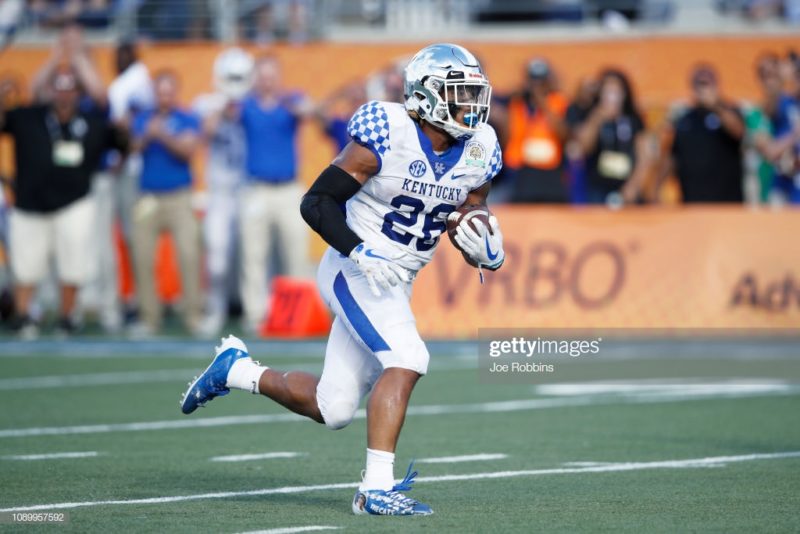 The Pittsburgh Steelers selected Kentucky running back Benny Snell Jr. in the fourth round if the 2019 NFL Draft and that selection seems to have a large portion of the team’s fanbase excited and that’s certainly understandable when you go back through his tape from the last three seasons. However, as we start our deep offseason breakdown of Snell, we’ll begin by taking a closer look at his career explosive runs of 20 yards or more that he had at Kentucky and contextualize each.

Officially, Snell is listed as having 30 runs of 20 yards or longer during his college career. After going through the Kentucky gamebooks, however, I was only able to identify 29 in total. If your curious as to how Snell’s college career explosive run totals and percentages stack up against the other top running backs in this year’s draft class, you can see that data in the first graphic below, which is sorted by best to worst 20+%. 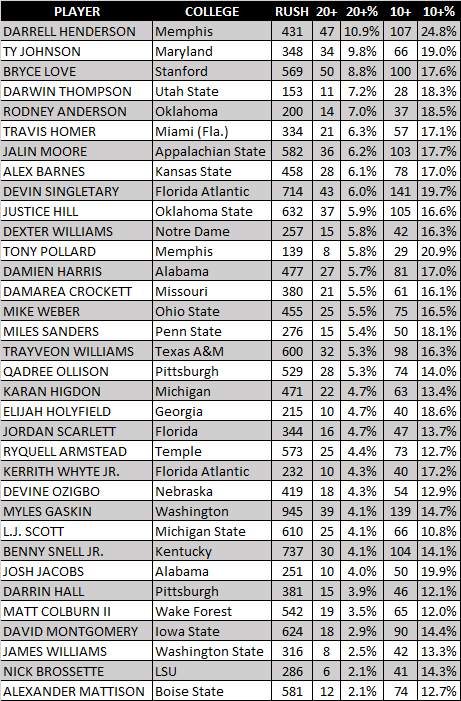 While it’s a loose comparison all the way around, you can see how it’s somewhat easy to compare Snell’s college statistical production to that of former Steelers running back Le’Veon Bell. Look closely at the 20+% for each player from their respective college careers. As you can see, both weren’t known in college as being able to deliver a high percentage of explosive runs. That obviously isn’t the end of the world and especially when you consider that the first running back drafted this year, Josh Jacobs out of Alabama, enters the NFL with a lower career 20+% than Snell’s. That noted, Jacobs did produce a much higher percentage of runs that resulted in gains of at least 10 yards than Snell did, albeit on quite a few less carries.

Now it’s time to look at each of Snell’s explosive runs from his college career from a contextualized standpoint. For starters, 9 of the 29 runs of 20 yards or longer that I identified Snell as registering during his college career resulted in touchdowns with his longest such one being 71 yards.

While 3 of these 29 explosive runs came with Snell receiving the snap of the football as a Wildcat quarterback, all of those came during his freshman 2016 season. 18 of these 29 runs came against loaded boxes that included 7 of more defensive players seemingly being able to play the run.

As you go through these plays, you also should notice that Snell was virtually untouched in the first 10 to 15 yards or more on several of them. When he is touched, it’s usually a feeble arm tackle attempt. A high percentage of these runs below include Snell running between the tackles and you’ll also notice that quite a few come out of the pistol formation with Snell lined up right behind the quarterback.

Made no mistake about it, Snell enters the NFL as more of a power runner and one who won;’t be mistaken as having a lot of speed. Even so, Snell showed that he could break the occasional explosive run in college and against stacked boxes as well. In the NFL with the Steelers, Snell isn’t likely to register a huge percentage of explosive runs. That said, his percentage of 20+ runs could come in slightly higher than what Bell registered during his career in Pittsburgh as Bell has a running style that isn’t as patient.