This piece is not meant to defend Pittsburgh Steelers outside linebacker Bud Dupree but to rather apply some context to his play and draft class. Rather than play the ever so popular ‘what if’ game, this piece will specifically deal with the cards that were dealt.

Following the 2014 season, the Steelers were dealt with a series of unfortunate cards. Pass rushers seemed to be an almost extinct species in Pittsburgh as the team had recorded just 33 sacks during the 2014 season. Even worse, Jason Worilds, who led the team with 7.5 sacks in 2014 abruptly decided to retire that offseason. All that remained was Cameron Heyward, who also had 7.5 sacks, a 36-year old James Harrison and a young Jarvis Jones, who had recorded just three sacks in his first two seasons. It was painfully obvious to everyone that pass rushers were in high demand in the steel city.

The Steelers hoped to inject some life into the outside linebacking unit by taking Dupree with the 22nd overall pick. Dupree was one of four edge rushers taken in the first round, after the likes of Dante Fowler and Vic Beasley and before Shane Ray, who was taken a pick later by the Denver Broncos. Charted below is the production of all four pass rushers since they have entered the NFL. 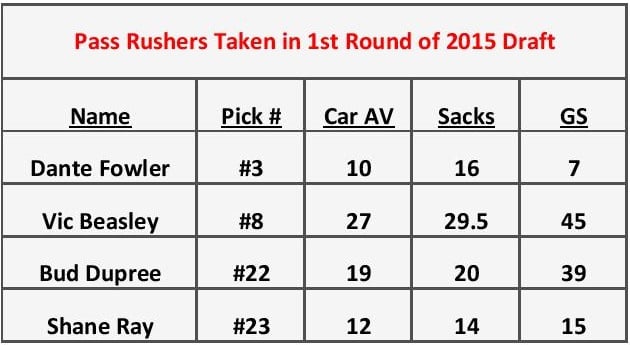 For starters, the debate between Dupree and Ray is a quick and easy one to dismiss. Dupree has outproduced Ray in career approximate value, sacks and games started. Ray is currently a free agent after battling wrist injuries throughout his four years in Denver. While Fowler and Beasley would not be available when the Steelers were on the clock, it is still interesting to compare their production to Dupree’s. The Steelers’ linebacker has outproduced Fowler, beating the Rams’ pass rusher in all three notable categories. Beasley is the only pass rusher with better production than Dupree but a closer look shows that this may not be the case. The Falcons’ pass rusher had a remarkable 2016 campaign with 15.5 sacks but since then has regressed enormously. In the two seasons since 2016, Beasley has recorded just 10 sacks and 13 quarterback hits while Dupree has recorded 11.5 sacks and 20 quarterback hits.

While Dupree has never had a breakout season such as Beasley, he has recorded a consistent level of production throughout his career. The Steelers’ linebacker has never finished with fewer than four sacks and no more than six sacks in any of his four seasons. Only five members of the 2015 draft class have recorded more sacks than Dupree, who has notched 20 sacks to date.

The five members of the 2015 draft class who have recorded more sacks than Dupree:

When it comes to Dupree’s play, it is fair to call his performance disappointing or average but with the context of the entire 2015 draft class, it would be difficult to label him a complete bust. There is a case to be made that the Steelers selected the most consistent pass rusher out of the four pass rushers selected in the first round. His career AV also leaves him middle of the pack compared to his first-round colleagues and his sack numbers are just outside the top five for his entire draft class.