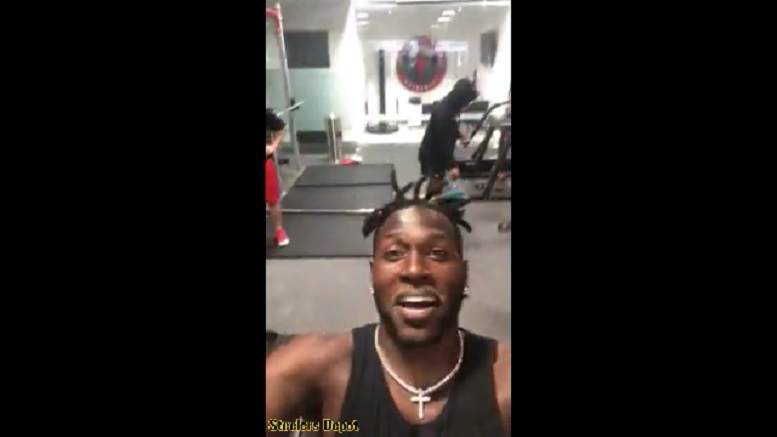 Will the Pittsburgh Steelers he able to trade wide receiver Antonio Brown by the time his $2.5 million roster bonus is due after the start of the new league year? It’s hard to say for sure right now but at least we think we now know that he won’t be traded to the Buffalo Bills like reports Thursday night suggested.

Regardless, Brown was in the gym working out on Friday and the wide receiver delivered an interesting message via an Instagram video.

WATCH #Steelers AB on Instagram: "Don't believe what they say about fake news, you heard? But stay tuned, though, AB might be somewhere in less than 24 hours." pic.twitter.com/D2TIOoqscH

“Don’t believe what they say about fake news, you heard? But stay tuned, though, AB might be somewhere in less than 24 hours,” Brown said.

It’s hard to know for sure if Brown knows something about another team possibly trying to trade for him and one he would approve going to. That said, later in the video he said he would announce his new team in a little bit.

“I love you guys, man,” Brown said. “Sorry for all of the confusion. Something positive’s about to be happening real soon, though. Trust me. Stay by the phone. Big announcement coming soon.”

Could it be the Oakland Raiders dealing for Brown? It’s hard to say but a reference about Brown wearing black and grey was made while he was lifting.

According to Aaron Wilson of the Houston Chronicle on Twitter, Brown has told people he thinks he’ll wind up with the Raiders.

Antonio Brown has told people he thinks he'll wind up with the Raiders, but it's not up to him. Time will tell if the Steelers are able to pull off a trade after talks with Bills blew up.