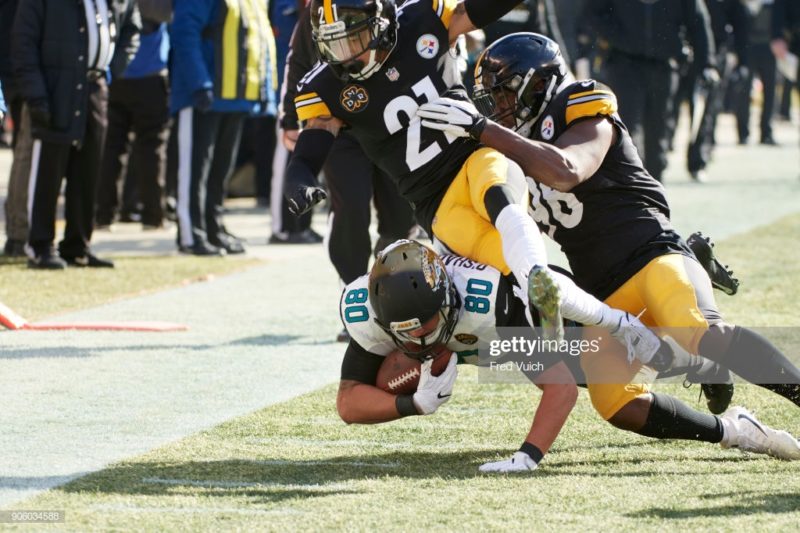 The Pittsburgh Steelers have already signed a few outside unrestricted free agents this offseason and they might not be done as it appears as though they might now be looking for a tight end to add to the roster after losing Jesse James to the Detroit Lions last week.

According to Field Yates of ESPN, free agent tight end James O’Shaughnessy, most recently of the Jacksonville Jaguars, visited the Steelers on Monday.

O’Shaughnessy, who originally entered the NFL in 2015 as a fifth-round draft pick of the Kansas City Chiefs, enters 2019 having registered 46 career catches for 449 yards and a touchdown. Durting the 2017 NFL Draft, the Chiefs traded O’Shaughnessy to the New England Patriots. However, the Illinois State product was waived by the Patriots ahead of the start of the 2017 regular season and the Jaguars claimed him.

Last season with the Jaguars, O’Shaughnessy played in 14 games and started 9 of them on his way to registering 24 receptions for 214 yards. He played just over 530 offensive snaps in 2018 for the Jaguars in addition to playing 27.8% of all special teams snaps the team totaled. He registered 2 total special teams tackles in 2018.

O’Shaughnessy’s best asset is his run blocking and thus it’s not overly surprising to see the Steelers have some sort of interest in him to help absorb this offseason’s loss of James. The Steelers currently only have two experienced tight ends under contract for the 2019 season in veteran Vance McDonald and Xavier Grimble, who was recently issued a low restricted tender. Younger and less experienced tight ends Bucky Hodges, Christian Scotland-Williamson And Kevin Rader are also currently under contract with the Steelers for 2019.

In all likelihood, O’Shaughnessy was offered a contract close to, or right at, the minimum for his accrued seasons in the league. Last season he earned a minimum salary of $705,000 as a member of the Jaguars. It’s probably also worth noting that the Steelers don’t have a long history of signing unrestricted free agents once they leave their visits with the team unsigned.