Kevin Colbert alluded that the Pittsburgh Steelers would not make any splashes in free agency as that goes against their traditional ways of business. While the team did not make a significant splash, the signing of cornerback Steven Nelson definitely sent some waves through Pittsburgh. The former Kansas City Chiefs’ cornerback signed a three-year $25.5 million deal with the Steelers after a career best 2018 campaign.

“A good barometer for corners: how often does he get his hands on the ball? Bat downs, tips, INTs. So, in college, you take their best two seasons, you add up their numbers of picks and numbers of pass break ups and you rank the top 15 guys…you’ll get a sense of who has the best ball skills in the draft.”

While Nelson is a four-year pro and obviously not a kid coming out of the NCAA, it would be interesting to see if his stats stand to the Belichick test. Charted below are the 2018 NFL leaders in plays on the football (interceptions + pass defenses). 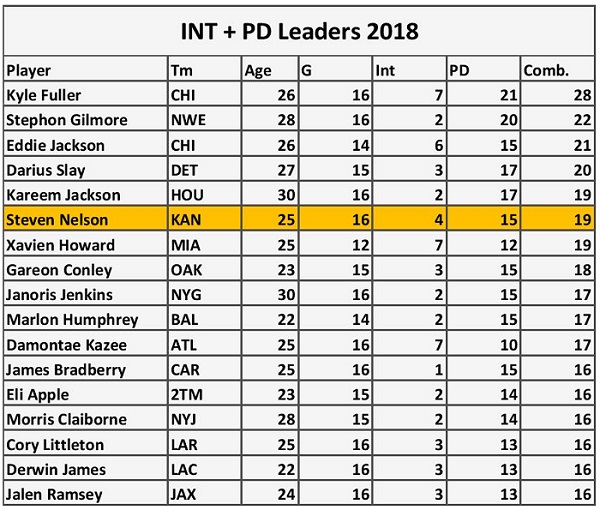 With four interceptions and 15 pass defenses, Nelson ranks among the NFL’s best defensive backs in being around the football. His 19 plays on the ball ranks tied for fifth in the NFL, above names such as Marlon Humphrey, Derwin James and Jalen Ramsey. His 15 pass defenses are also tied for fifth. If the Steelers were looking for defenders who had a nose for the ball, they certainly seemed to have found one in Nelson.

The 2018 season was also no fluke for the former Chiefs’ cornerback. Despite the fact that he recorded four interceptions this season, after not recording any in his previous three seasons, his presence around the football remained consistent. While he only played nine games in 2017, he did put together a full 16-game campaign in 2016, where he recorded 16 pass defenses. His 16 pass defenses during the 2016 season was just enough to be tied for ninth most in the NFL.

Over his last 40 games, Nelson has recorded 35 pass defenses and four interceptions, giving him an average of just under one play on the football per game.

Though Belichick’s scouting method certainly helps to show a cornerback’s ability to make plays on the football, it is still just one piece of the puzzle. How well Nelson transitions to the Steelers’ defense will have to wait until September to be tested. Until then, the team has to be happy to have seemingly found a ball-magnet cornerback opposite Joe Haden – something the team desperately lacked last season.