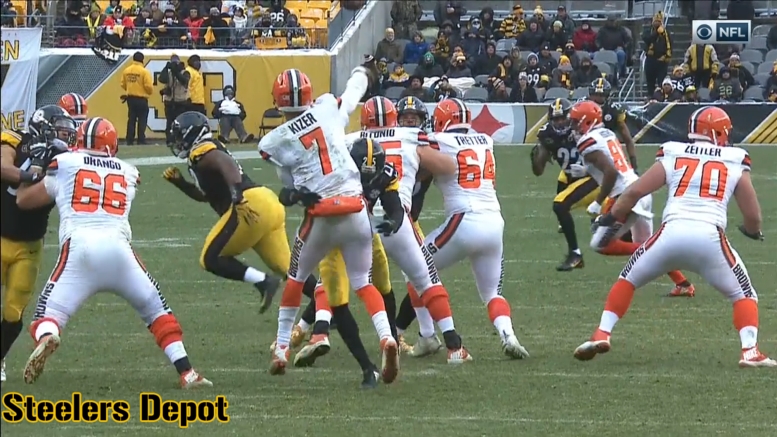 So it turns out John Dorsey likes himself some trades. He especially likes to trade away players that prior regimes brought in, either in the draft or in free agency. Since the Cleveland Browns hired him to be their general manager up through yesterday, the team under Dorsey has now traded away a stunning 10 players over the past 16 months. And it’s reasonable to believe they’re not done.

The latest trade was just yesterday when the Browns sent starting right guard and former Pro Bowler Kevin Zeitler to the New York Giants in exchange for edge defender Olivier Vernon. This is actually a shrewd move when you break it down.

While Zeitler remained a quality player, he had not been performing at the same level that he displayed while he was with the Cincinnati Bengals. And the Browns are already looking for a spot to start 2018 34th-overall draft pick Austen Corbett, who can now easily slide into the right guard spot.

Their offensive line now appears to be set for 2019, going, from left to right, Greg Robinson (perhaps with some competition), Joel Bitonio, J.C. Tretter, Corbett, and Chris Hubbard. That’s not necessarily a murderer’s row but it’s a solid and stable group, the bulk of which contributed to just a five-sack second half of the season a year ago for Baker Mayfield.

Zeitler, at the time of his signing, was also the highest-paid guard ever on the books. That’s a good salary to move, and while Vernon comes at a price too, their need for a paired edge defender for Myles Garrett was much greater than having another quality guard.

Zeitler is just the first trade this year (and they would have liked to have been able to trade Jamie Collins, whom they released). Dorsey moved 10 players last year, including all of the quarterbacks who were on their 2017 roster: DeShone Kizer, Cody Kessler, and Kevin Hogan. They also sent Danny Shelton, Josh Gordon, and Jason McCourty to the New England Patriots, all in separate trades.

Wide receiver Corey Coleman, lineman Shon Coleman, and running back Carlos Hyde were all moved in August and beyond (as was Gordon). Cornerback Jamar Taylor was yet another player traded away by Dorsey. Of these players, Hyde was the only one he was responsible for.

But those weren’t the only trades. They also traded for Tyrod Taylor and Jarvis Landry (and acquired Damarious Randall in exchange for Kizer), and they also made two picks-for-picks trades during the 2018 NFL Draft.

Is yesterday’s trade just the first of several for Dorsey this offseason? Or was the excessive number of team-to-team moves just a part of the process of turning over the roster? He did indicate last month that he doesn’t see the Browns as a team that is ready to ‘go for it’, so he knows further talent influx is needed. He sent a lot of players away last year. Could he possible trade for a couple now?