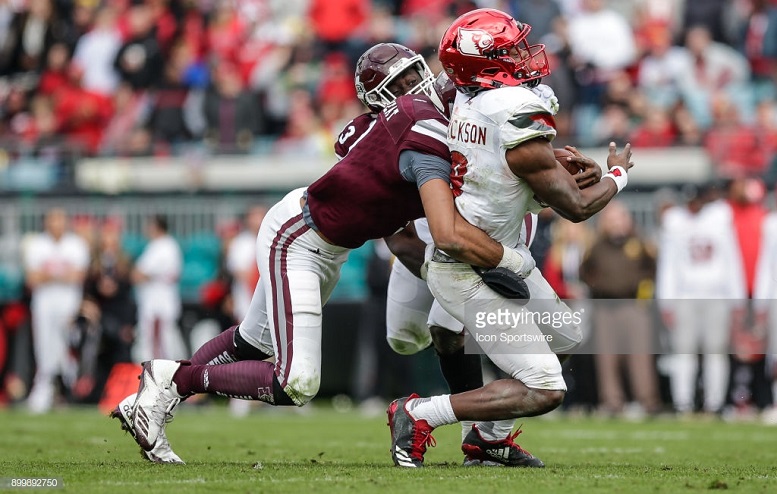 The defensive class of the 2019 NFL Draft got their first crack at working out at this year’s Combine. And boy was it a good day to be one of them. Here’s the highlights. And a couple lowlights.

– Off the top, to talk about all the groups, their athleticism was on display throughout. You’re seeing the effect of the college game. Spread offenses require defenders to match their speed. And there was plenty of it today at Indy.

– Mississippi State’s Montez Sweat was the name who stole the show. With his size, 40 time (definitely his 40 time) and unlike someone like DK Metcalf, who struggled with his agility testing, Sweat was excellent there too.

At 260 pounds, he ran a re-donk-ulous 4.41, the fastest time ever recorded for someone at his position, with a 36 inch vert, 10 foot broad, and 7.00 three cone. While he did show some tightness in drills, he’s not comfortable nor natural flipping his hips, that three cone time is excellent. Obvious first rounder. Just a question of how high he will go.

– Some mixed reviews on Rashan Gary’s tape but his workout was very, very good. Coming in at 6’4, 277, he ran a stellar 4.58 and lept 38 inches in the vert. Given his size, that 7.26 three cone is solid, too. Today will help solidify him as a top ten selection.

– The two big nose tackles mentioned yesterday showed their explosiveness in their ten split: Daylon Mack (1.74) and Khalen Saunders (1.73). Obviously, their agility drills were among the lowest but you can sense that burst they have off the line. Saunders showed a powerful strike in the bag drill.

– If you watched today’s events, UCF’s Trysten Hill was the talk of the day. Strong 40 and ten split (5.04/1.74) with a 35 inch vertical. Dude moved like a linebacker. Teams will question why he didn’t start his junior season after doing so the previous two – and a general lack of production (six career sacks). But he’s an easy-mover who could have a better pro career than college.

– Similar boat for Texas’ Charles Omenihu. Not as bad and his 36.5 inch vertical is impressive but didn’t quite put up the numbers some thought. Still think he could be a candidate to fit in the Steelers’ scheme. His effort on tape warrants that kind of look.

– We’ve talked about TCU’s Ben Banogu as a potential sleeper. That sleeper might have woken up today. 1.56 ten yard split, 40 inch vert, 11’2″, and a 7.02 three cone. Excellent to elite production across the board.

– Even though I’m not his #1 fan, you knew Brian Burns was going to test really well. And he did. 4.53 40 (1.51 split), 36 vert, 10’9″ broad, 7.01 three cone. Hard to get much better than that. I thought his performance in drills was all the more impressive. Same as you saw on tape. One of the most fluid and natural guys going backward in Indy. Caught the ball clean too.

– One of the worst performances of the day? A man who may have been on the Steelers’ radar – Jachai Polite. Tough Combine for him. Weird answers speaking to the media, bristling at teams who grilled him on his tape, turned in a 4.84 40, then claimed he pulled a hamstring and couldn’t finish the day (despite not pulling up lame after his attempt). Forgetful couple of days. Needs to have a great Pro Day to make up for it. Odds are, at least one of Mike Tomlin and Kevin Colbert will be in attendance.

– After every Combine, especially for a guy like me who doesn’t follow the draft process much during the NFL season, I have a list of names of guys I need to go check out. Akron’s Jamal Davis is one name I’ll be running towards. Excellent workout: 4.60 40, 1.58 split, 39 inch vert, 10’2″ broad, 7.00 three cone. Right behind Burns with his fluidity, ability to sink his hips, and drive downhill in drills.

Do want to see him show a better punch with his hands. Not a lot of sacks in his Zips career but maybe that was scheme-related. Lot of TFLs (31.5).

– Less impressive testing than Davis but I thought BC’s Wyatt Ray moved with fluidity in coverage. Nine sacks as a senior.

– Top three cone of the day? NIU’s Sutton Smith had a blistering 6.75. But at 233 pounds and a thin, slight frame, there’s still questions about his game. Day Three guy.

– Florida’s CeCe Jefferson had a rough outing. Over five seconds for his 40 time, a 7.5 three cone (yikes) on a 266 pound frame. Tight in drills, arms and upper body flailing around that made it tough for him to turn. Production as a senior was poor too. All around bad combination.

– Good day for Josh Allen. Dude has a huge lower half. You can tell how and where he creates his power.

– Ditto for Justin Hollins. Different body type, thinner and more high-cut, but looks comfortable in coverage. The guys who pump their arms, move fluidly in their upper body, are the guys you can tell have done it before and it doesn’t bother them.

– I can see Michigan’s Chase Winovich on Pittsburgh’s radar. Good day today for him with solid tape. 6.94 three cone was his best time.

– The top two dudes at the position didn’t disappoint. Devin Bush and Devin White killed it.

That’s the high-level athleticism you need to play on an every down basis in the NFL. And they can. Given the scarcity of that type of athlete, it’s hard to see the Steelers letting Bush pass them at pick 20.

– But plenty of other linebackers ran well too. Texas’ Gary Johnson seemingly came out of nowhere (4.43), while Germaine Pratt tested well (4.57).

– Terrill Hanks, one of the guys I wanted to see from this entire draft class, reportedly pulled up with a hamstring injury after his first run. Sure hope that’s the truth too because he ran a 4.98. Doesn’t match with the tape. He didn’t do any of the drills.

– Thought Drue Tranquill had a nice day. Converted safety so it’s no surprise to see him look more natural in drills. Can see it as he drives downhill. Needs only one powerful step to push off and drive while others require multiple steps to gather themselves and attack the football.

– A&M’s Tyrel Dodson was an effective mover and turned in a 4.6 flat. Another guy to my list.