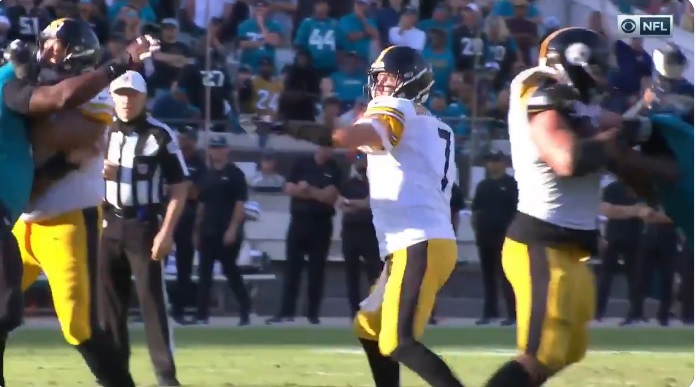 A month ago, I passed along that data that indicated Pittsburgh Steelers quarterback Ben Roethlisberger was the king of dink and dunk pass attempts during the 2018 NFL regular season. Today, I can pass along some more data to you from the 2018 season that helps back up that first stat up quite a bit.

#Steelers QB Ben Roethlisberger's average time to throw of 2.38 seconds in 2018 was the fastest of any NFL QB in the regular season.

According to Pro Football Focus, Roethlisberger’s average time to throw of 2.38 seconds in 2018 was the fastest of any NFL quarterback all season with the qualified amount of attempts. Of his 710 total dropbacks, 428 of those had him spending less than 2.50 seconds in the pocket before either an attempt, sack or scramble happened, according to PFF. Roethlisberger’s passer rating was 99.5 on those 425 pass attempts but he did throw 8 interceptions on his way to completing 72% of those attempts.

When Roethlisberger attempted a pass during the regular season 2.5 seconds or more after the football was snapped, he completed just 59.1% of those and threw another 8 interceptions. His 12 touchdowns, however, along with the yardage gained on those completions, helped him register a passer rating of 92.4 on those 247 total pass attempts. As a means of comparison, PFF has Roethlisberger’s average time to throw in 2017 at 2.42 seconds and in 2016 that numbers was higher at 2.49.

Where Roethlisberger seemed to struggle the most during the 2018 season was his deep pass accuracy as only 35.6% of his 87 total pass attempts that flew 20 or more yards past the original line of scrimmage were on target. That percentage, however, was better than his 2017 deep accuracy number of 31.8%. Roethlisberger’s highest deep pass accuracy percentage in the last several years came in 2015 and it was 48.6%. His rating on those 74 deep pass attempts, however, was just 73.3 as 7 of them resulted in interceptions.