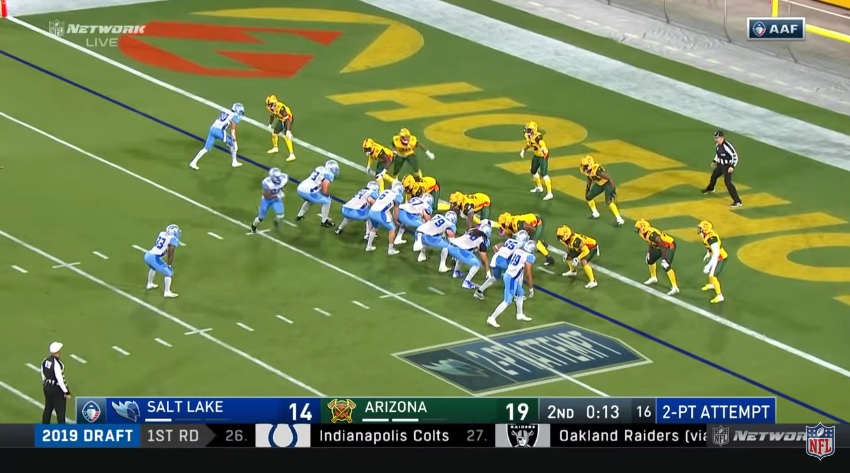 You probably caught at least one game of the newly unveiled AAF or at least heard the buzz about it. The football wasn’t the best but ideally, it’ll get better in time. And there were strong individual performances, already showing several players who deserve a second chance to get back into a training camp by this summer. Some of the names who played well and for our purposes, would bolster the Pittsburgh Steelers roster.

John Wolford/Arizona – Quarterback play will define all these teams this season. Mike Bercovici and Christian Hackenberg were benched as their teams struggled to generate anything offensively. On the other side of things, Wolford looked like the best QB in the league, tossing four touchdowns in a win over Salt Lake Sunday. He has good size, a nice arm that shows touch, with a strong base and compact delivery to play with consistency. Pittsburgh has their fourth quarterback in Brogan Roback but if not here, then he’ll wind up somewhere, Wolford is on his way to getting another look with more reps in the AAF.

Branden Oliver/Salt Lake – Oliver had mild success with San Diego/Los Angeles before falling out of the league last year, cut by the Colts in camp. But I’ve always liked his game and versatility. A compact body, the Steelers like their backs on the heftier side, who can catch out of the backfield and has a little experience in the return game. His best season came in 2014, carrying the ball 160 times with another 36 receptions.

He was the Stallions’ leading rusher Sunday, averaging five yards per carry and running hard to cap off this two-point conversion late in the first half.

In Pittsburgh, would he make the roster? Odds are no. But I like him to add competition as a #3 with a rookie and a veteran presence in that locker room so it isn’t all on James Conner’s shoulders. He’ll make the room better.

Greg Ward/San Antonio – To me, Ward was the best player I watched this weekend. Athletic, a good football IQ, he caught five passes for 37 yards and nearly tossed a touchdown pass, using his QB skillset from his college days to the new league. Versatile guy who can play receiver and get some return work. I’ll be shocked if he doesn’t ink a contract with some team.

Will Sutton/Arizona – Sutton was a “name” coming out of Arizona State, a third round selection by the Chicago Bears who never panned out. He played in 36 games, 18 starts, and is still looking for his first big league sack. But he found one in the AAF, notching one this weekend. A little undersized and underpowered but a little Javon Hargrave like in terms of his build and part of the newer age mold of nose tackles.

Joey Mbu/San Antonio – Mbu was a player I liked out of Houston but has had a very limited NFL career. Like Sutton, he recorded a sack this weekend against San Diego. A bigger, stronger body than Sutton and could round out the bottom of the roster in replacing Daniel McCullers.

Terence Garvin/Orlando – Didn’t get to watch the Orlando/Atlanta game but Garvin was hard to miss. Two interceptions on Saturday, including a pick six that yes, was the benefit of a tipped pass, but strong play nonetheless.

A Pittsburgh reunion is unlikely but he’s an easy guy to root for and a good enough athlete who should get another shot in the NFL next year. Solid special teams player, as Steelers’ fans know.

Sterling Moore/Arizona – Moore was probably the best defensive player I watched this weekend. Showed serious ball skills, recording two breakups, like this one in the end zone.

Statistically, he graded out really well, too.

Sterling Moore from the @aafhotshots was targeted 6 times vs Salt Lake. Allowed just 1 catch for 12 yards.

Same passer rating as if the QB had just thrown the ball away every snap instead.

He’s one of the older (just turned 29), more experienced (75 career games) and that definitely helped him against more green opponents but if I’m running the Steelers, I’m asking my pro scouts to keep an eye on him the rest of the AAF’s season.

Jamar Summers/Birmingham – Remember him? A UDFA from UConn who appeared in camp with the Steelers last year, he got plenty of positive press, including picking off this pass on a tip drill.

Again, not counting on him circling back to the Steelers but he’ll be on the NFL’s radar if he keeps playing like he did this weekend.

Nick Novak/Birmingham – He had the best showing of any of the kickers, though most of them played well. Went 4/4 in his Iron debut, including connecting on one from 47 yards out. It’s been awhile but he’s put in some excellent NFL seasons and we know the Steelers will bring in competition for Chris Boswell.

My one concern though is having a kicker who is kicking this much over an entire season. Worried he’ll have a dead leg working throughout the spring, summer, and in a hypothetical where he’s your starting, Steelers kicker, into January.

Colton Schmidt/Birmingham – Novak’s specialist teammate, he looked to put in a good performance. Couldn’t find any punting stats from this weekend (the league must do a better job of having it accessible) but I remember him pinning against Memphis. I’m a little less zealous about replacing Jordan Berry than most fans but like at kicker, competition is needed.