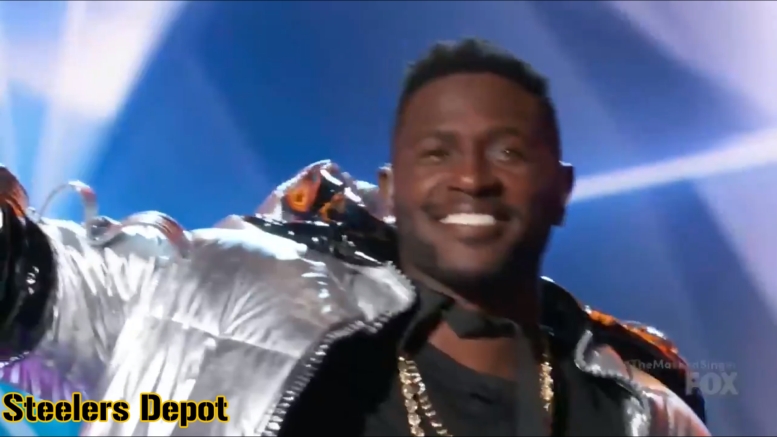 As if Antonio Brown wasn’t grabbing enough headlines, the Pittsburgh Steelers’ wide receiver was [what I assume, since I didn’t watch] the featured celebrity on the debut of the new reality show The Masked Singer last night. A cynic might wonder if he didn’t try to boost his public profile in the hopes of being more recognized when he was revealed. I’m not that quite cynical, but the rest of you can have at that.

From the field to the stage! 🏈 @AB84 was the first reveal of the season. Did you guess Antonio Brown was #HippoMask? #TheMaskedSinger pic.twitter.com/oUbRJS6I3h

The Masked Singer is a reality show that puts recognizable celebrities from a variety of fields in unrecognizable and absurd costumes. Their identities are tightly guarded until they are ultimately eliminated during the show, at which point they remove their mask to reveal who they are. The show was taped prior to Sunday’s game—perhaps well before; specific information is not immediately handy, but there’s no reason to think that it in any way prevented him from practicing this past week.

So Brown went to talking about himself being the GOAT and even going so far as to buy for himself a goat ring worth something like $20,000 to returning to the reality show stage as a gigantic hippo. And that’s not the most ridiculous thing we’ve had to write about him this week, so, you know, I’m not even phased anymore. Antonio Brown is a hippo. Yawn.

As you undoubtedly well know, the nine-year veteran held himself out of practice this past week citing a knee issue. He was told to take an MRI that he chose not to do before going AWOL after Friday’s practice, which led to Head Coach Mike Tomlin making the decision to deactivate him for the game because he was not given enough information regarding his health in a timely fashion.

Nobody on the team or associated with the team has claimed to have heard directly from Brown since halftime, when he is said to have left the stadium. Tomlin said yesterday that the last conversation he had with his star player was prior to Sunday’s game, in which he told him the best thing he can do is pull for his teammates. Instead, he pulled out of the parking lot when they were losing 10-3.

Antonio Brown the football player is at the height of his profession, but Antonio Brown the brand is his true passion, and he spends a great deal of time and energy carving out his public image, an endeavor that evidently includes burying a lot of bodies, so to speak.

Several players, generally anonymously, have spoken out since Sunday to express frustration. Frustration with Brown and his behavior, frustration with Tomlin and the team and what he has been enabled to get away with, frustration that so often the focus has to be turned away from football.

Well, Brown won’t be playing football for several months now. It won’t be in a hippo costume when he does, but will it be in a Steelers uniform? That may be decided over the coming months.