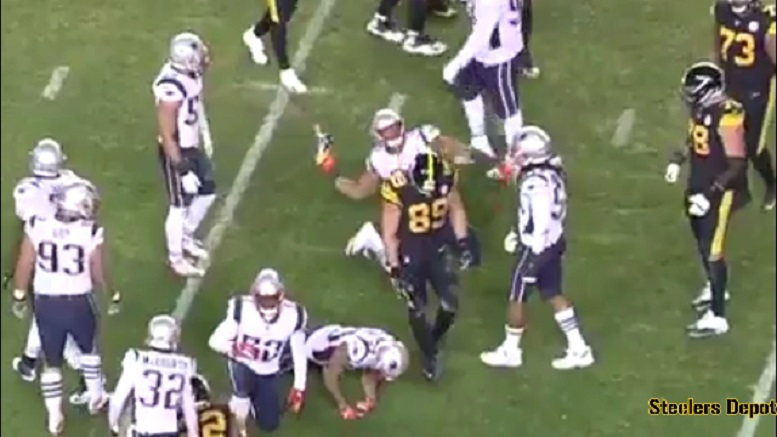 In the Pittsburgh Steelers Sunday home win over the New England Patriots backup running back Stevan Ridley rushed for 16 yards on 3 carries. His left shoe, however, probably had double that amount of yardage thanks to Patriots defensive end Trey Flowers throwing it.

With 2:52 left in the fourth quarter of Sunday’s game between the Steelers and Patriots, Ridley ran off left guard for 3 yards. Flowers attempted to tackle Ridley by his lower legs on the play but only came away with the running back’s left shoe. Flowers then proceeded to throw that left shoe down the field and in the direction of the Steelers end zone.

While you couldn’t see Flowers throw Ridley’s shoe on the CBS broadcast of the game, the all-22 tape certainly shows the heave. Additionally, you can see Steelers defensive lineman Cameron Heyward react to the shoe being thrown on the sideline when the CBS cameras cut to him after the play was over. The Patriots took a timeout at the conclusion of that play and CBS went to a commercial break.

On Thursday, Ridley, a former member of the Patriots, took to Twitter to call out Flowers for throwing his shoe during Sunday’s game and you can see that tweet below.

I doubt Flowers will be fined for throwing Ridley’s shoe on Sunday but we’ll see. He certainly wasn’t penalized by the referees after his toss and thankfully the Patriots called a timeout after that play was over. At least Ridley had the last laugh at his former team thanks to the Steelers holding on to beat the Patriots.