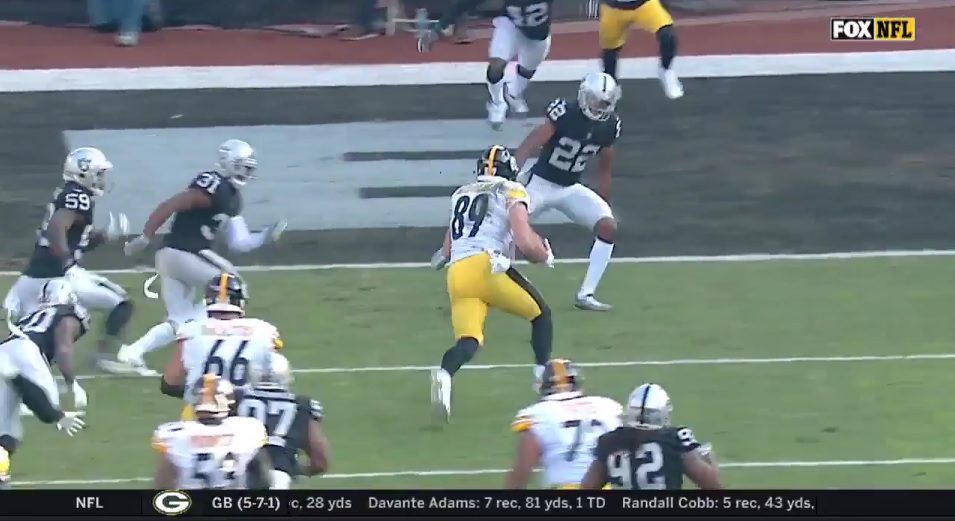 Before we’re on to New England (lord help the Steelers), we have to take a look back at the Oakland Raiders game one last time, in which the Pittsburgh Steelers fell 24-21, marking one of the worst losses in Mike Tomlin’s time as head coach of the franchise.

Surprisingly, the Steelers didn’t struggle in the tackling department like they usually do in losses. Just one player on the defense missed a tackle. One guess as to which one that player was.

Let’s take a look and move on from that disastrous performance.

Welcome to the club, Brian Allen.

All jokes aside, Allen missed his first tackle of the year on the opening kickoff, whiffing on Dwayne Harris in the open field.

Take a look at that missed tackles list from the Raiders game though. Three of the 4 misses came on special teams, which makes it that much more of a disastrous performance by Danny Smith’s unit.

Then we get to Sean Davis.

As I mentioned on Twitter Monday evening, I do think Davis is dealing with some sort of ailment. News came out Thursday that he missed with knee issues, but I don’t think that’s why he’s missing tackles. He seems to have a reluctance to use his right shoulder as the main point of contact when he goes in for hits, causing him to go for arm tackles.

Granted, this miss against Jalen Richard doesn’t come with his right shoulder, but it’s another arm tackle attempt in space that goes woefully wrong for Davis.

Before, he would look to run right through the ball carrier, dishing out as much punishment as possible. Now, he’s hesitant once he closes in. He seems more worried about breaking down to make the sound tackle, rather than sticking with what worked in the first half of the season.

On special teams the Steelers had a serious problem getting Harris on the ground cleanly. On this kick return here, Harris forces Dangerfield to miss with a diving tackle attempt, and then punches Heyward-Bey in the chest with a mean stiff arm, allowing him to get around the corner for additional yardage on the return.

When two of your key special teams guys are doing this, it’s going to be hard as a unit to play a clean game.

Now, to make you all the more frustrated:  the Steelers won the tackles battle with a +3 margin, meaning Pittsburgh forced 7 misses Sunday afternoon.

In his first career start, Jaylen Samuels did a nice job of making defenders miss in space despite having very little burst or explosiveness. He’s just so darn big as a back that he runs through tackle attempts when he has a full head of steam.

JuJu Smith-Schuster was spectacular on Sunday, and he added a forced miss in the loss, running through a tackle attempt on his second catch of the game.

Vance McDonald is not a guy you want to see in the open field at this point. Rather than running through guys, McDonald busted out some major moves, forcing Nicholas Morrow to miss in space, picking up a key first down.

Look at that move he puts on Morrow in space. If McDonald doesn’t do that, the Steelers likely have to go for it on fourth down from outside the 5-yard line. Instead, McDonald forced Morrow to miss and got past the first down marker, moving the chains for the Steelers, leading to Smith-Schuster’s first touchdown.

On the Steelers’ final drive, Samuels forced two big misses on this swing route to the right flat. He has to double catch the football, but then he runs through the first tackle before dipping back inside to force the second miss while at full speed.

If anything, Samuels is going to be really good in the passing game moving forward for Pittsburgh. He’s almost like Mewelde Moore.