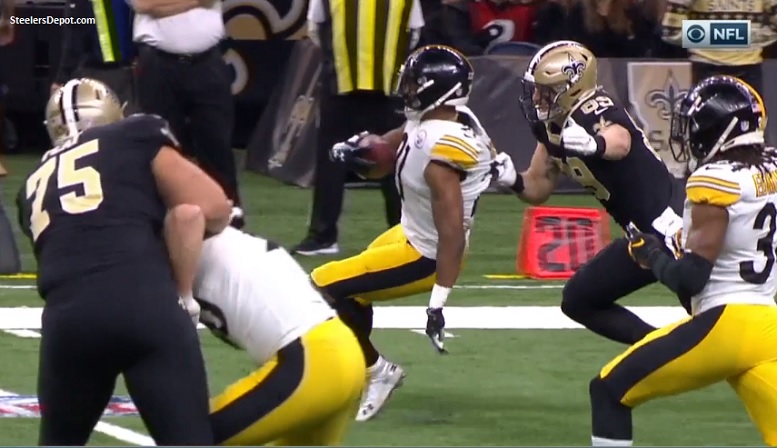 There were 15 total penalties assessed during the Pittsburgh Steelers Week 16 Sunday road loss to the New Orleans Saints and as least one of those resulted in a player from the home team being fined this past week.

According to Josh Katzenstein of The Times-Picayune on Saturday, Saints tight end Josh Hill was fined $20,054 this past week for his horse collar penalty on Steelers safety Sean Davis following a first quarter interception.

Saints TE Josh Hill was fined $20,054 for his horse collar penalty against the Steelers.

With 10:35 left in the first quarter of Sundays game in New Orleans, Saints quarterback Taysom Hill attempted a deep pass to wide receiver Ted Ginn Jr. only to have Davis intercept it in the Steelers end zone. Davis then proceeded to get up and return the intercepted pass and was finally horse collar tackled  by Josh Hill at the Steelers 25 yard-line. The Saints were then penalized 15 yards for the illegal tackle.

While Josh Hill was fined this past week, there’s still no word about Saints defensive end Cameron Jordan being fined for punching Steele guard Ramon Foster after the New Orleans defense had recovered the late-game fumble by Pittsburgh wide receiver JuJu Smith-Schuster. Jordan was penalized for unnecessary roughness for that punch.