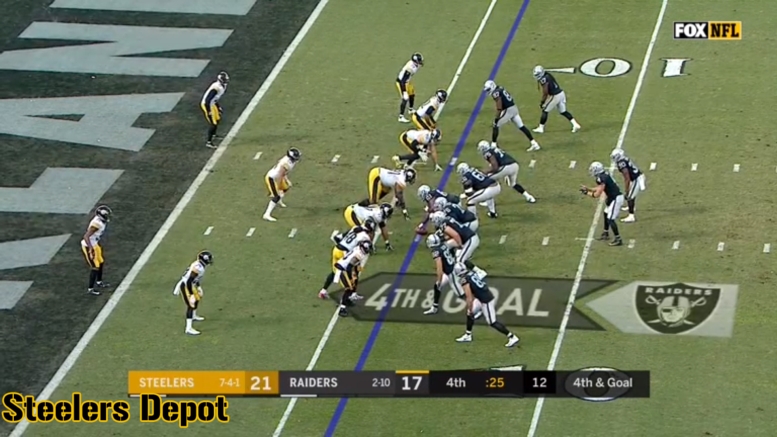 Derek Carrier is, for all intents and purposes, the Oakland Raiders’ third-string tight end. He scored the game-winning touchdown on Sunday against the Pittsburgh Steelers to give the Raiders just their third win of the season in 13 tries. On fourth down, with just seconds to play, no less.

That’s not the way you want to lose a game. You don’t want to lose any game in any way, but to lose one in the final seconds to a player who is probably at best 7th or 8th in the pecking order in terms of who is the most likely to receive a pass kind of adds insult to injury.

As a matter of fact, Carrier has the 11th-most targets for the Raiders this season. A full 10 players on offense have been targeted more frequently than he has, including five players who have only played in eight games or fewer. Marcell Ateman has only been active for the past four weeks but has been targeted 23 times.

None of this means anything to the Raiders, however. Carrier is a player that believe in, and as far as they’re concerned, the only reason he doesn’t play more is because Jared Cook is playing at a Pro Bowl level, and Lee Smith is their blocking tight end.

Carrier, in his seventh season but first in Oakland, has just 43 receptions in his career on 62 targets, going for 394 yards and two touchdowns, his second being the game-winner over the Steelers. He has only caught 10 or more passes in a season once in his career. Does Derek Carr care? No.

“Derek to me is one of those joker kind of players”, Carr said after the game according to the Steelers’ communications department, speaking of his athleticism. “Derek doesn’t get all those reps [behind Jared Cook], right? If Jared wasn’t here and wasn’t playing, obviously Derek would be that guy”.

He added that previous quarterbacks who have worked with Carrier have raved about him. “The fact that his number was called versus a certain look and all those kind of things, I had 100% confidence”. He even added that the play was a long time coming.

“I actually missed him on that same play against Denver. In Denver, he could have scored again”, he said. “It was my fault, I made a mistake. I hugged him after and said I owed you for the one against Denver. We always have that confidence; he just doesn’t get a lot of plays his way. You saw the same route. The guy is a heck of a player”.

As for Carrier, he said that he and Carr looked at each other and smiled as soon as the play came in from the sideline. Mike Hilton slipped on the play, making it all the more easier. “That’s why I tried to hurry up and come out of that break well quick and give Derek a throw”, he said.

He did, and Carr provided that dagger that sent the Steelers spiraling into a tailspin they might not be able to correct before crash-landing for 2018.