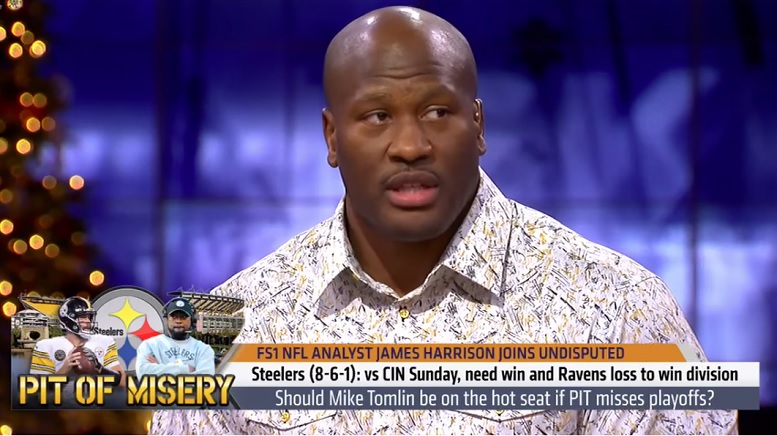 Unless they win on Sunday against the Cincinnati Bengals and get some help from the Cleveland Browns the Pittsburgh Steelers will fail to make the playoffs in 2018 and it will mark the first time since 2013 that such an event has happened. With the Steelers now on the verge of failing to make the playoffs this season, former outside linebacker James Harrison made it clear during a Thursday interview on The Undisputed that head coach Mike Tomlin should receive all the blame for the team’s disappointing 2018 campaign.

“I would have to give that to Mike Tomlin and the reason I give it to him because he’s the head coach,” Harrison said when asked who is the most to blame for the Steelers disappointing 2018 season. “He has to go out there and get this team ready. You’ve had instances where the defense plays well, you’ve had an instances where the offense plays well and you know that they’re capable of doing that.

“If you look at the defense that he’s actually built, I think he has six or seven first-rounders, he has a couple of second-rounders through either draft or trade, so he’s put together a defense that should be capable of going out there and stopping offenses. And I think at the end of it the Achilles heel has been the defense not able to come through in the end. So, I have to put that on Mike Tomlin even though he has won a significant amount of games, he’s won a Super Bowl.”

After placing the blame on Tomlin for the Steelers disappointing 2018 season, Harrison then proceeded to take another shot at his former head coach and the one Super Bowl championship he’s won.

“The Super Bowl that he did win was basically a Bill Cowher-based team,” Harrison said. “The team that actually went in 2010 [to the Super Bowl] was still a majority of Cowher [players] and since then I think he’s reached the AFC championship game one time and over the course of the last two years he’s lost the first game to Jacksonville where the defense gave up 40, 50 something points.”

Harrison’s Thursday comments sure makes him sound like he’s still bitter at the way he was handled last season. Because of that, show co-host Skip Bayless asked Harrison if he is indeed still bitter at Tomlin and the Steelers for the way they dealt with him and his ultimate departure from the team late last season.

“No, I asked for a release like I said early in the year and they didn’t give that to me,” Harrison said. “If they had gave me my release early in the year, I probably never would have been in New England.”

Harrison went on to say that while he doesn’t think that Tomlin will lose his job at the end of this season, he can see him being on the hot seat in 2019.

“I dont see the Steelers firing him,” Harrison said. “That’s just not what that organization does. I think worse-case scenario, he’ll be playing his last year on his contract next year and if things don’t pan out the way that they want them to pan out, they’ll let him go.”

You can watch the full segment devoted to Tomlin potentially now being on the proverbial hot seat below: