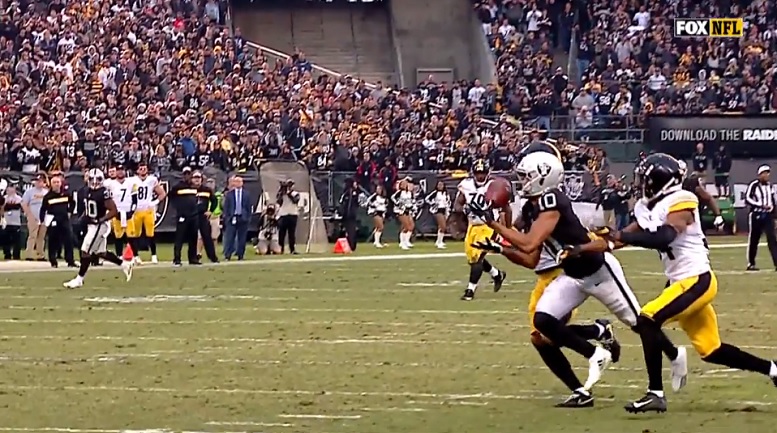 For the most part on Sunday at the Black Hole, Oakland Raiders quarterback Derek Carr had his way throwing the football against the Pittsburgh Steelers defense as the former second-round draft pick out of Fresno State completed 25 of his 34 total pass attempts for 322 yards and two touchdowns in his team’s 24-21 home win. In fact, if not for several offensive penalties by the Raiders, Carr might have had an even bigger day passing the football against the Steelers defense and especially on third downs.

While the Raiders offense did struggle to score points against the Steelers defense in the first three quarters and some of Sunday’s game, Carr finally corrected that as he led his unit on long touchdown drives in the team’s final two possessions of the football. That final of two touchdown drives included the Raiders longest gain of the game, a 39-yard completion down the middle of the field from Carr to wide receiver Seth Roberts, who up until that point had 4 receptions for 38 yards in the game.

That long completion to Roberts, however, can be traced back to Carr slightly tweaking his wide receiver’s route from the same play the Raiders offense had run earlier in the game. Carr admitted as much during his post-game press conference.

“We had like a crossing route for Seth [Roberts], like coming across the field, and earlier in the game, actually we got the look exactly that I wanted but I didn’t want to change the play. I wanted to let the play eat and all those kinds of things. But we got the same kind of look with different people covering, but different bodies in there,” Carr explained. “But I just told Seth, I think it was a TV time-out or a two-minute warning, if I’m not mistaken – we were in the huddle, and I told him, ‘Seth, if we get two-high, I know what you got, but just take the middle and I’m going to try to pump it one way and I’m going to throw you the ball if it’s two-high.”

The two-high that Carr is talking about is of course two-high safeties, or cover-2, and the Steelers did indeed run that same kind of coverage a few times on Sunday and at least once against the same Raiders offensive formation used on the long completed pass to Roberts late in the fourth quarter.

That earlier play that Carr referenced actually came on the first play of the fourth quarter on a 2nd and 10 from the Steelers 44-yard-line. The Steelers were in cover-2 on that play with inside linebacker L.J. Fort responsible for Roberts in slot. At the snap of the football, Roberts cut just inside Fort and proceeded to run a crossing corner type route. Carr drifted right of the pocket and his throw wound up being too high for Roberts to catch.

To the credit of Steelers defensive coordinator Keith Butler, safety Morgan Burnett replaced inside linebacker Vince Williams on the deep completed pass play to Roberts and he was in charge of covering the Raiders wide receiver in the slot while Fort assumed Williams’ spot in the defense on the weak side. Fort also rushed on that play.

In all honesty, it was a decent matchup for the Steelers to have and certainly a lot better than having Fort on Roberts. Even so, Roberts followed the directions of his quarterback perfectly and even though Burnett had decent coverage on Roberts, Carr delivered a perfectly thrown pass that the veteran safety waited too long to get his head around to find.

“Derek told me he was going to throw me the ball if they were in Cover-2, so I tried to stay on my hash and run downfield and catch the ball,” Roberts said of that long reception after the game was over.

Carr changing Roberts’ route on that play was also done during a Raiders practice this past week.

“Friday, we had the same coverage and it was kind of the same result. I just thought about that and that’s pretty funny,” Roberts said after the game.

Obviously, Raiders head coach Jon Gruden also had praise for his quarterback and wide receiver for that deep pass connection after the game was over and he even he admitted that Carr did the same thing with Roberts during practice a few days ago.

“That was a play designed for Jared (Cook) and I’ll be honest, Derek (Carr) threw it to Seth (Roberts) on the practice field against that coverage and I said, ‘I can’t believe he threw that,’” Gruden said. “That ball is not designed for him, he is an alert. But Carr sees the field and I have been saying that from the beginning. If we can protect him and we can give him some good looks, he’ll make the throws. And Seth Roberts made one heck of a play on that. What can I say, our guys made some clutch plays when they had to make them.”

If only Steelers head coach Mike Tomlin could have said the same thing about the team’s defense after the game was over. If only he and Butler could make game-changing defensive adjustments like the one Carr made on offense Sunday in the fourth quarter.